On the right, Rogue Harbor road. Lundy Road continues on the left. Follow for 3-4 miles  to Pottersville. The road becomes extremely rough, passable only by Jeeps, bikes, and hikers. 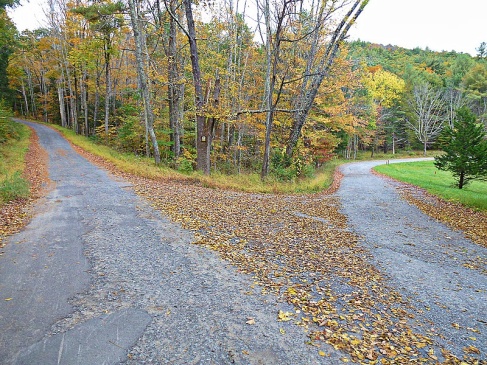 The area is quite isolated today; I can’t even imagine what it was like 100 years or more ago. A milling town called Potterville was founded here in the 19th century and named after the owner of a lumber mill, Francis Potter. Potter’s mill was the main source of income for the townspeople until it burned down. Because it was the sole employer in the town, people began leaving. In 1927, there was a flood that accelerated the exodus.

According to Ulster County records, several murders occurred there; a man killed his family and then killed himself; in another incident a murderer was caught and hung in the town square. I’m not superstitious, but some who have visited the remnants of Potterville report a feeling of being watched.

The land Potterville once stood on is now owned by Open Space Institute and the buildings have been demolished, although you can still see some foundations.

The road and the country up there are beautiful, but I have never seen anyone on Lundy Road past this point…scared maybe? Perhaps one year I’ll  organize a Halloween ride up Lundy, to arrive at midnight.

Good luck, and if you make it out alive let me know.