Coming up shortly, I’ll have a nice ride report from my Summer Solstice ride in Delaware County, in which I took in 73 miles of wonderful mixed terrain: some familiar, some new, and as usual, all of it hilly and breathtakingly gorgeous. Here’s just a teaser: 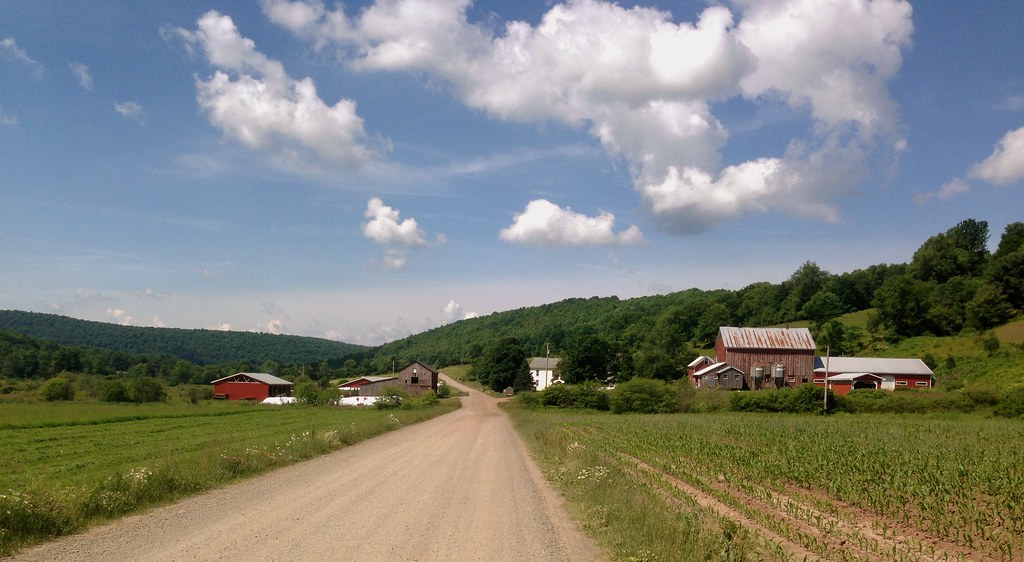 In the interim, I’d like to point Catskills area readers to the 2014 Catskills Outdoor Guide in which you’ll find a short guide to cycling around the Catskills by Riding the Catskills co-authors John F., John S. and myself.

The Watershed Post did a great job of putting together a comprehensive guide to outdoor activities in the Catskills, from hiking to boating to cycling (and eating! With a separate food guide as well). So many wonderful reasons to visit…

Here is a heatmap of every road I’ve cycled in the past 2 years, centered roughly on John F’s new house.  The darker and redder the line, the awesomer the road.

Although, to be fair, some roads are well-ridden because they are merely conduits to awesomeness, rather than being inherently awesome qua awesome.

And here are a few photos from today’s lovely, meh-free ride.

Today marks my 6-week anniversary at the new house. Compared with Olivebridge, pretty much everything is better. We’re much closer to town but still in an extremely rural setting (in fact, cattle graze just behind our house). We have real internet, and not that crappy satellite internet that only worked 75% of the time, and then slowly. Our cell phones work. So everything is great.

Sadly, the riding just isn’t as good out here as it was up in the Catskills. Don’t get me wrong, this is grade-A cycling country, and I think the vast majority of cyclists would probably prefer it to the Catskills. But I miss the mountains, extreme isolation, and adventure of riding in the high Catskills. Then again, it’s nice to know that I won’t necessarily die undiscovered of extended exposure if I end up in a ditch some day.

The Catskills are still easily accessible, it’s just a minimum of a 60-mile round trip to get up there–not really feasible for a weekday ride.

Here’s a short and fun route for you. You can start out of New Paltz or Gardiner.

My camera is pretty much dead, but I did manage to get a few non-blurry photos of the route (Amazon says my new camera will be here by June 5). The route mostly passes through farm country, and there’s a convenient stop around mile 20 in Walden, which has a range of options for food. This route is easy as can be: Only about 1300 feet of climbing over 31 miles. Take a moment at mile 9.5 to go down the dirt road on the left to the Shawangunk Grasslands National Wildlife Reserve. It’s beautiful.

This picture is from a previous ride. This is the Aumick Road entrance to the Shawangunk Reserve, a park that John S has written eloquently about. If you’re interested in riding up there, I’ve mapped a route to the entrance for you here.

That’s all for now. New routes should be coming fast and furious in short order. Also coming soon: The return of Rene!