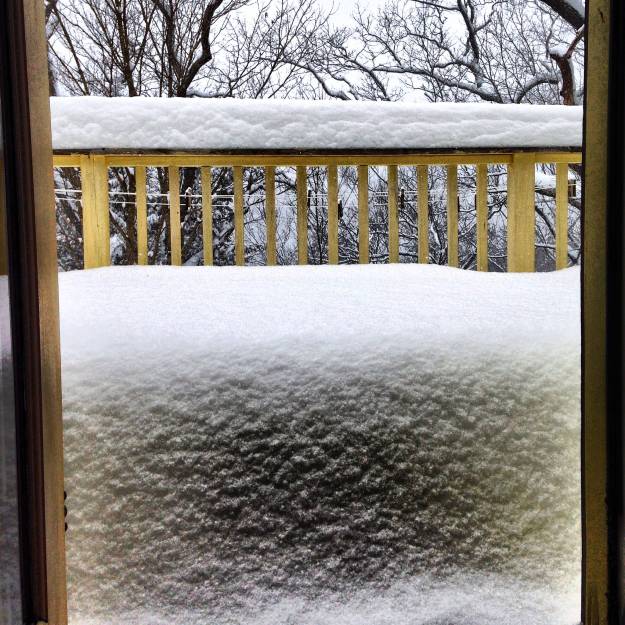 Hmm, not that way. Maybe the front yard?

The snow was deep enough out there to swallow my kid. Those little stalks in the foreground are 4-foot coneflowers.

This just hasn’t been the best February for cycling. It has been just spectacular for cross-country skiing, though.

For years, I was an XC ski scoffer. The Walkill Valley Rail Trail is literally 50 feet from our house, and my wife hits the trail on her skis whenever there’s enough snow. I always thought of XC skiing as jogging in the snow, more or less, and it simply didn’t appeal. She bought me some old off-rental skis one christmas, which I dutifully used now and then. A few years back I was trudging down the rail trail on my crappy skis when I ran into some friends, an older couple who lives nearby. They were all blissed out on their skis and asked me why I was so grumpy-looking. I said something like “my wife makes me do this, I’d rather be cycling.” They laughed, said “follow us!”, and blasted off the trail into the woods. Soon enough we were on the MTB loop I’ve ridden a thousand times, a swoopy, flowy, up-and-down classic of a trail… on skis! Somehow it had never occurred to me that cross-country means, you know, across the countryside, not just back and forth on the rail trail. Ever since that day I’ve been an avid XC skier. I got a pair of metal-edge skis and some stiffer 3-pin boots, and hit the MTB loop whenever there’s enough snow to bury the rocks.

Most winter there’s only enough snow for a short period of time, but this month it’s absolutely dumped down snow, and up until a few days ago, the temperatures had been consistently below freezing, making for deep and generally ideal conditions.

Some hardcore friends do a twice-weekly night MTB ride that morphs into a night backcounty ski in the wintertime. The actual route doesn’t change, though, so what is a 90-minute MTB hammerfest in July becomes a 3-hour XC ski epic in February. The loop is no joke, with over 1000 feet of elevation gain in 8 miles, including one truly scary descent (or truly intimidating climb, depending on which direction you are going), which is locally known as “The Widowmaker,” displaying an impressive lack of creativity. With the frequency of snowfall we’ve had, we’re breaking trail on every outing.

Breaking trail through the woods on skis with 120+ feet of climbing per mile is a tremendous amount of work. It’s amazing how much heat the human body can generate. It’s also impossible to underdress — you can be overheated in a t-shirt at 12F. (Just don’t twist an ankle, break a binding, or stop for any reason, or you’ll die!) For the past few weeks, that’s been the schedule: ski, ski, ski, a long bike ride when it’s not actually snowing for 24 hours in a row, then ski some more. This is how we survive the Northeast winters. That, and leaving snarky comments on Strava for our so-called friends in California.

Speaking of surviving the winter, here’s a key survival tool:

Shimano, Sidi, Lake, Northwave, Specialized, and probably others make quality winter cycling boots. They are all expensive, but what price would you place on warm (or at least not frozen), dry toes?

Sadly, a week ago I managed to sprain my knee. My stepdad, in Dutchess County, has an epic sled run that he’s been curating for years. It goes around rusty old farm equipment, over stone walls, through the woods, over streams, through brambles. He made a wooden sign for the top of the run with eight black diamonds and the title “The Babykiller.”  The whole thing makes my mom mutter darkly and shake her head, Marge Simpson-style.  My kids absolutely love it.

I made the tactical error of doing the sled run on a crowded 4-foot toboggan with my sister and my ten year old. We jumped the tracks in the woods, and I tried to turn us by planting a foot. My foot stopped, but nothing else did, and I felt a horrible popping sensation that I thought had to be the ACL. In that moment a welter of thoughts raced through my head. Would my life be different now? Would I need surgery? Did I just DNS Battenkill? Could I invent a way to go back 10 seconds in time?

But I think I got lucky. I don’t think there was any ligament damage. It was very stiff and sore for a few days, but felt stable (as in, the knee didn’t feel like it wanted to fall apart and go sideways). Rest, ice, compression, elevation, and then a few days of very high cadence, zero resistance on the trainer, just spinning as fast as possible without pogoing off the saddle. The high cadence spinning really seemed to help the knee feel looser and more normal. Yesterday, 6 days after the accident, I went for an actual bike ride (on the single speed, no less), and although it felt weird for the first hour or so, by the middle of the ride I was actually forgetting about the injury for minutes at a time. I haven’t tried anything resembling an actual effort yet, but I’m optimistic that no real damage was done. Time will tell.

One thing I’m not clear on:  is that polar vortex thing responsible for these ridiculous sunsets? 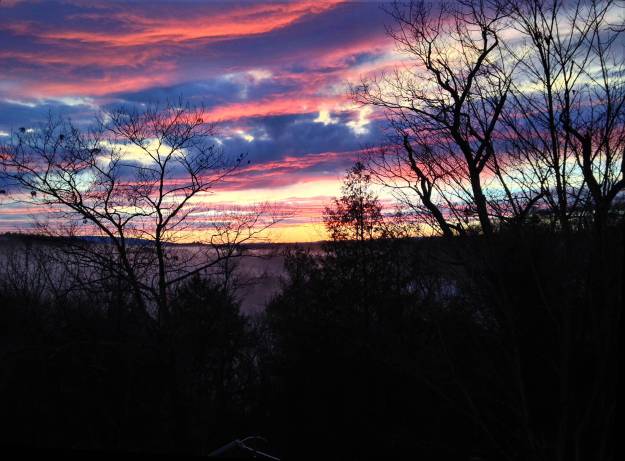 4 thoughts on “The Dead of Winter”