After a brutally long, cold and snowy winter, I had been itching to get back to cycling. I bike commuted the short distance to work through most of the winter, but that type of cycling is insignificant and serves little more than utility. It doesn’t count. Cycling for the sake of cycling largely ceases during winter in New England, and I was eager to get back into doing long distances, to take in scenery, to have no deadline to be someplace, to explore. I happened to be up at our Catskills home for the weekend for other reasons, and the weather was promising to be perfect for a spring ride.

I had been wanting to try a new route that I mapped last year, which would take me to the Pepacton reservoir. It would take me over a couple of mountainous dirt roads which I’ve ridden before, but other than them it would be mostly new territory. I was keen on doing this route not because I was particularly drawn to seeing the reservoir, but because the route takes in a 10-mile, continuous descent, and the thrill of the descent is, primarily, what compels me to climb hills.

I had done only one long ride this season, just last week, so I wasn’t in good enough shape to tackle a mountainous ride of too much distance, not this early, but I wanted to get in 100k. Typically my Catskills routes average 1000 ft of elevation gain per 10 miles, but 6200 ft would be too much this early in the year– that’s like D2R2, a ride I spend all summer preparing for! So I cut some of the mountains out of the route, and incorporated 10-15 flat miles on either end, leaving some pronounced hills in the middle (and that 10-mile descent!) for a more reasonable 5000 ft overall elevation gain:

I started out in Bloomville, after having an excellent breakfast at Table On Ten, just down the hill from my house: 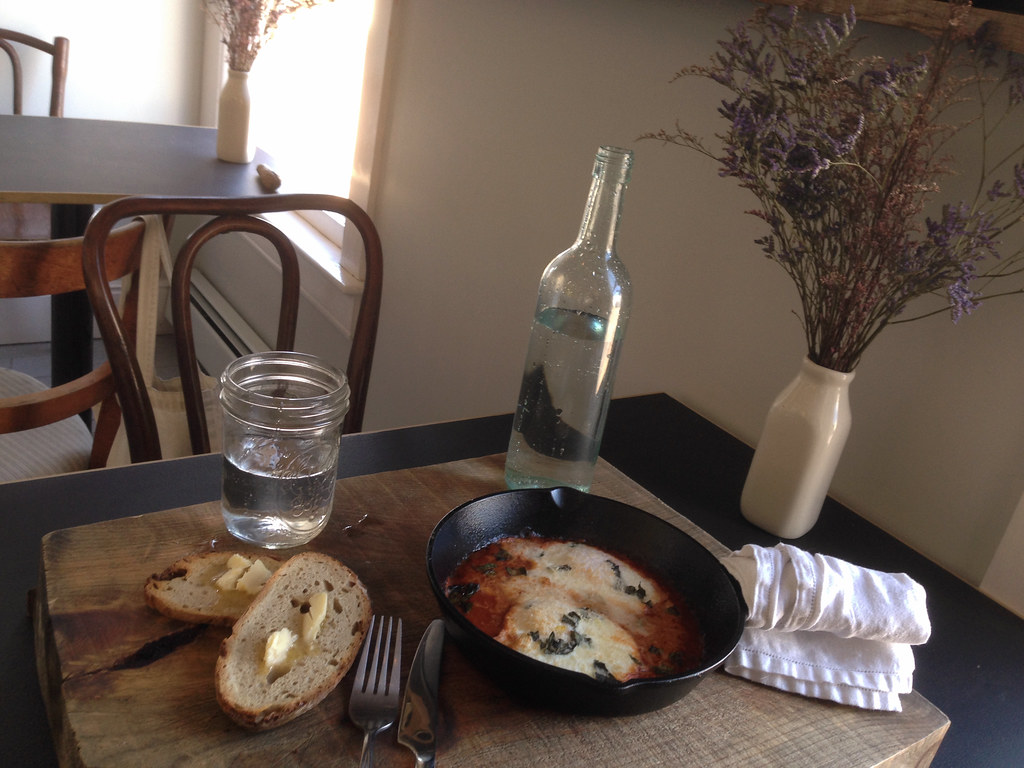 From there I followed the Delaware River, West Branch, along the flat Back River Road for 15 miles through Delhi to Hamden. But the flatness ends abruptly with the turn onto Basin Clove Rd, which takes you over the mountain separating Hamden from Downsville, shown in this photo: 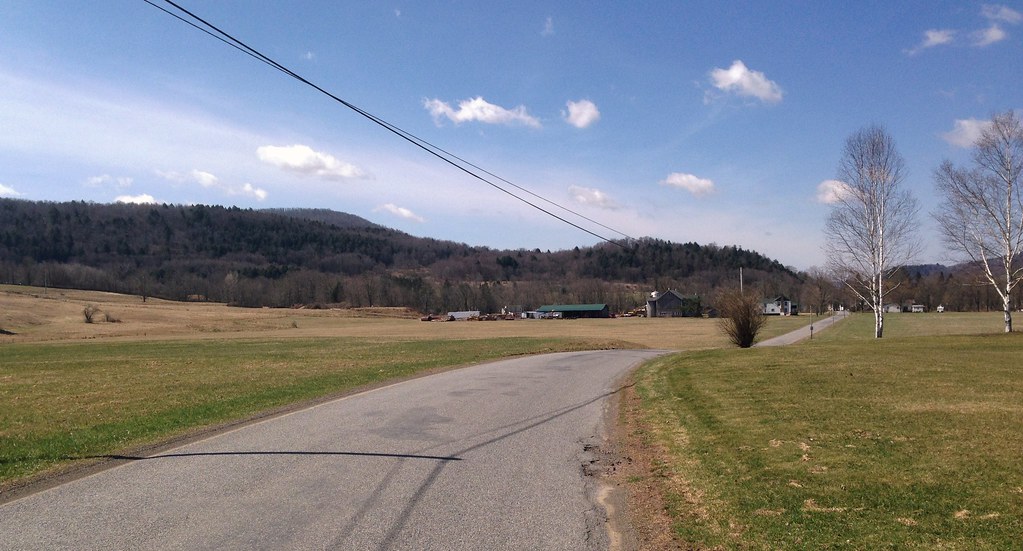 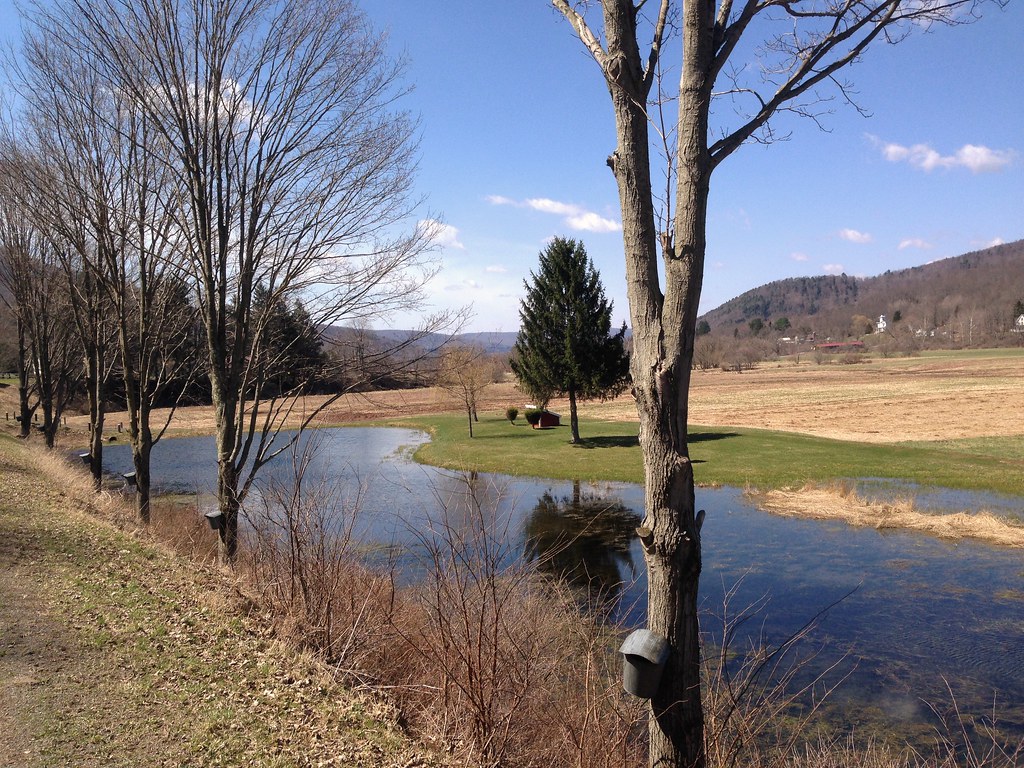 On to Basin Clove Rd, the first major climb: cat 3 with an average grade of 9.5% for more than two miles. 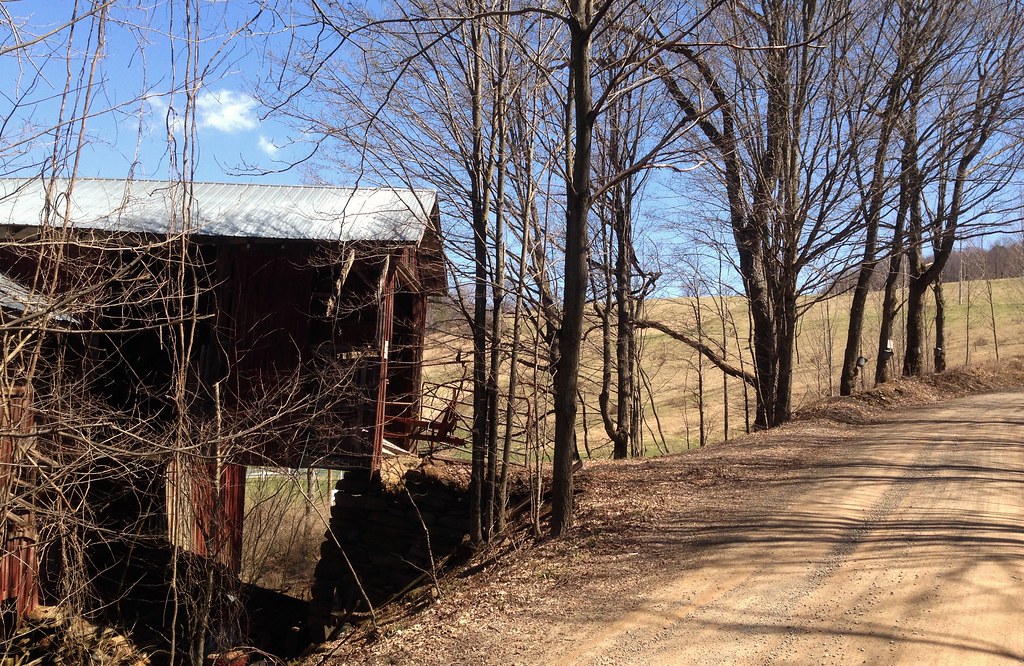 I’m never good at capturing the intensity of a climb looking up a hill, it always appears more accurately steep looking down it, so this is what it looked like behind me: 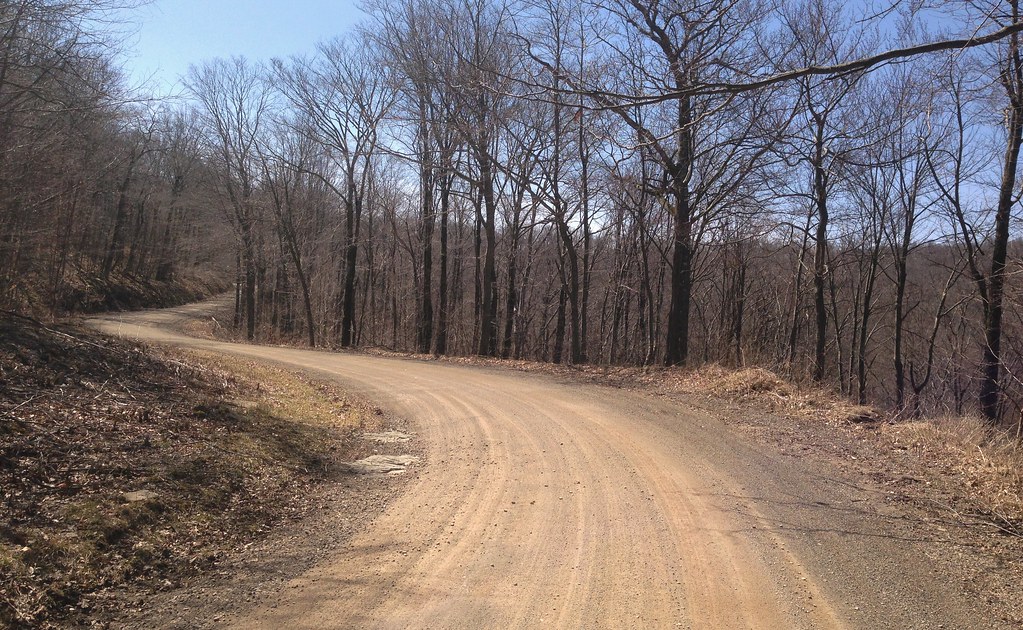 Initially, I lamented the lack of flourishing tree buds and other signs of sprouting greenery that mark the progression of spring.  A little early for that in these parts. I’d have to settle for the residual shades of grays and browns from a retreating winter. But I soon realized that early spring in the Catskills is the season of water– equally beautiful in its own right, and what I missed in terms of emerging spring color was made up for by the tumbling kinetics and sounds of water, everywhere and all around me. Mountainsides turn into waterfalls, drain ditches into mini rapids. It occurred to me that it was perhaps most appropriate that I was riding this route in early spring, because the visual (and audible!) cues to just how impactful this region is to New York City’s water supply were unavoidable.  You see, NYC gets its water from a network of man-made reservoirs located in the Catskills, built between the 1940s and the 1950s. The Pepacton is the largest of these. The water from the reservoirs is channeled through a network of aquaducts and tunnels to the city more than 100 miles away. NYC prides itself in its water, routinely judged among the finest municipal waters in the nation, and the city goes to great lengths to ensure the quality of its water is maintained through extensive land conservation efforts.

And it was here, climbing up Basin Clove Rd, that I first realized how much water drains down the mountains.  This is what the drain ditches looked like: 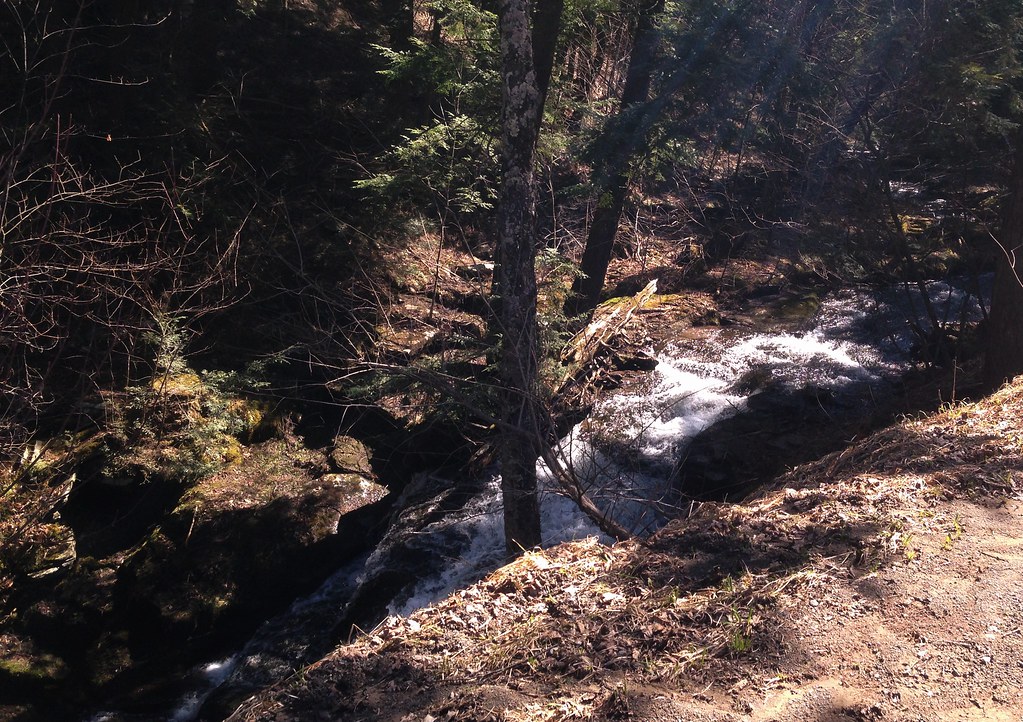 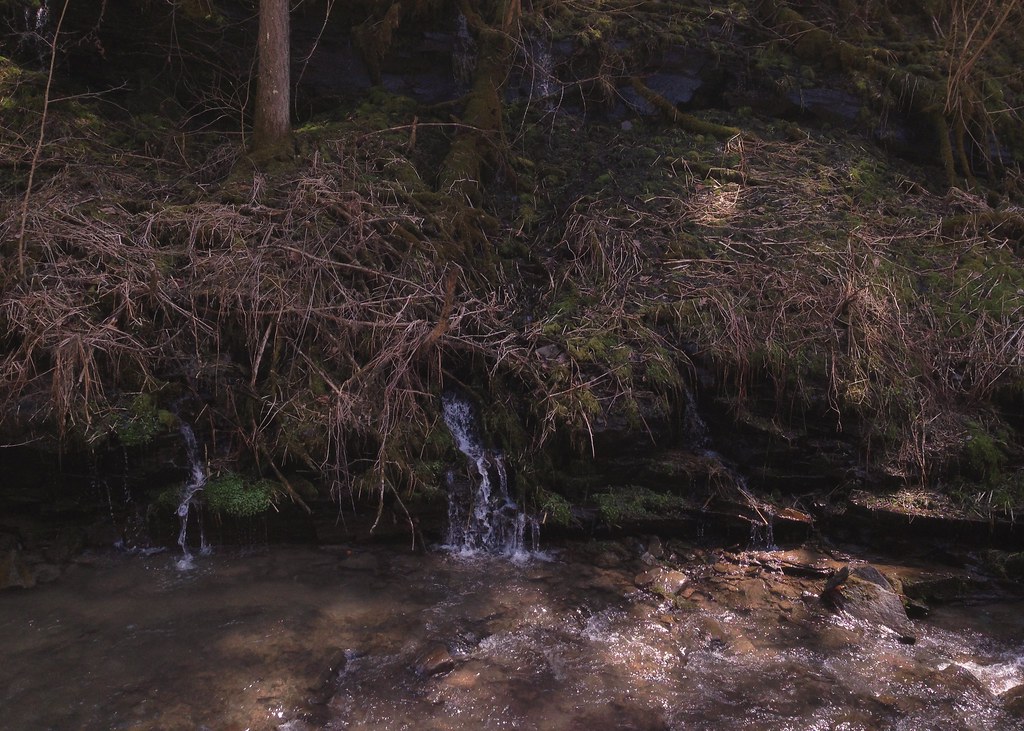 The sound of running water created a soothing wall of white noise, which helped me settle in to that meditative zen-like state you need to get into to help you focus on getting up the mountain.  Of course, stopping every so often for a break to take photos helps, too.

Eventually I reached the top of Basin Clove Rd, and got to enjoy a similar view to what I just showed you, only this was taken without turning my head backwards: the start of the 10-mile descent down, down, down Gregory Hollow Rd to Downsville: 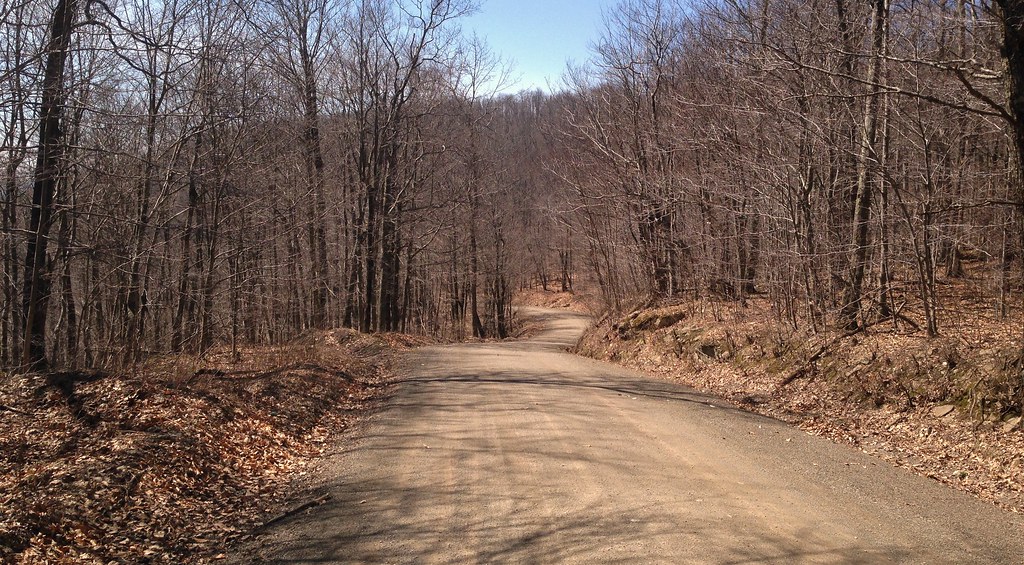 More water along the way. 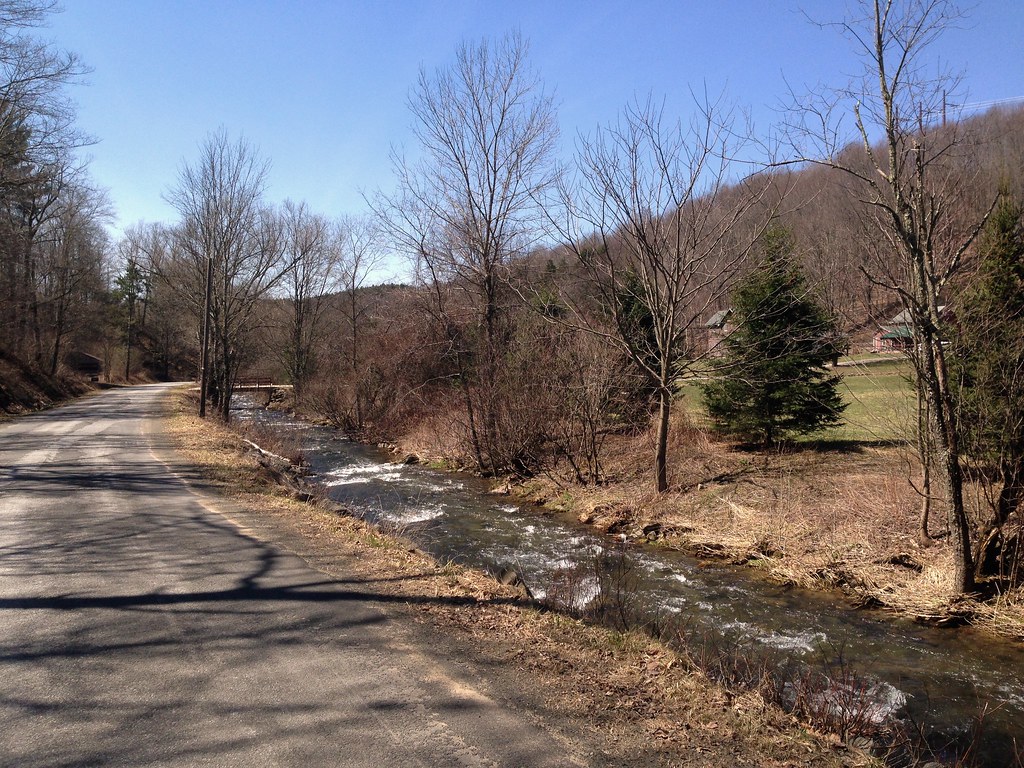 Did I mention water? 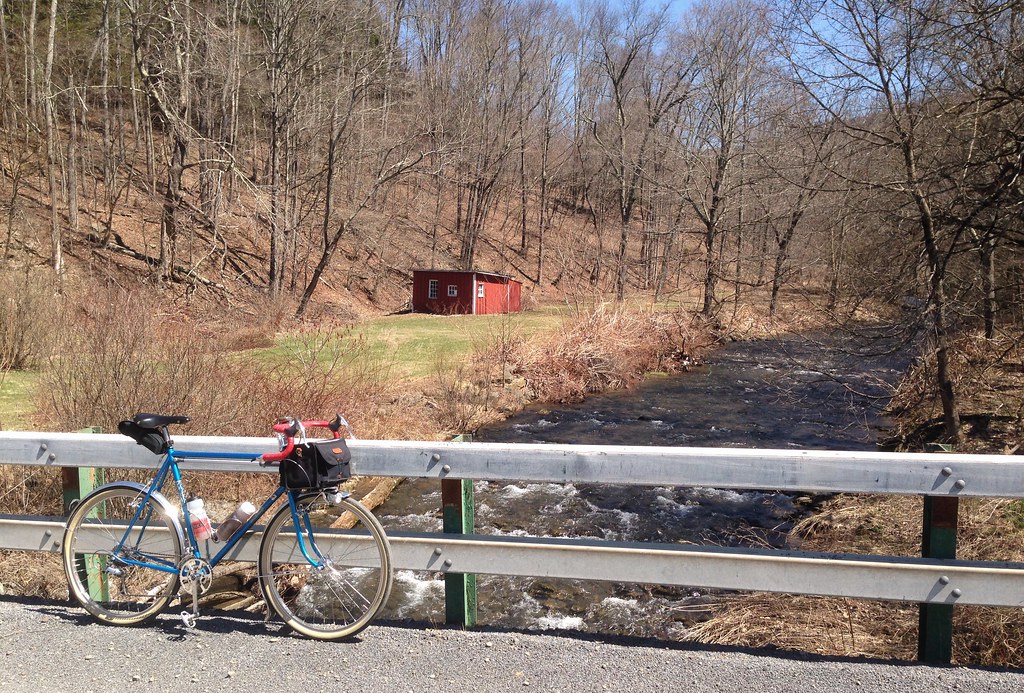 The sound of water was so pronounced, I took a recording of it:

Eventually the descent ended in Downsville, a small village with a convenience store, convenient for filling up my water bottles and using the restroom. The Pepacton reservoir’s western tip is in Downsville, less than a mile from the Downsville covered bridge. 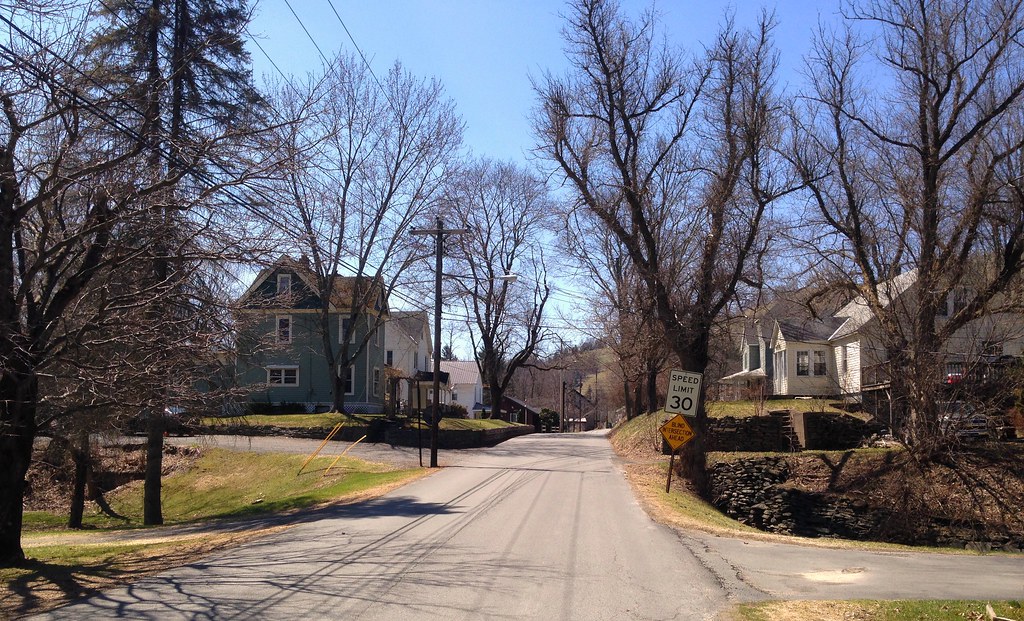 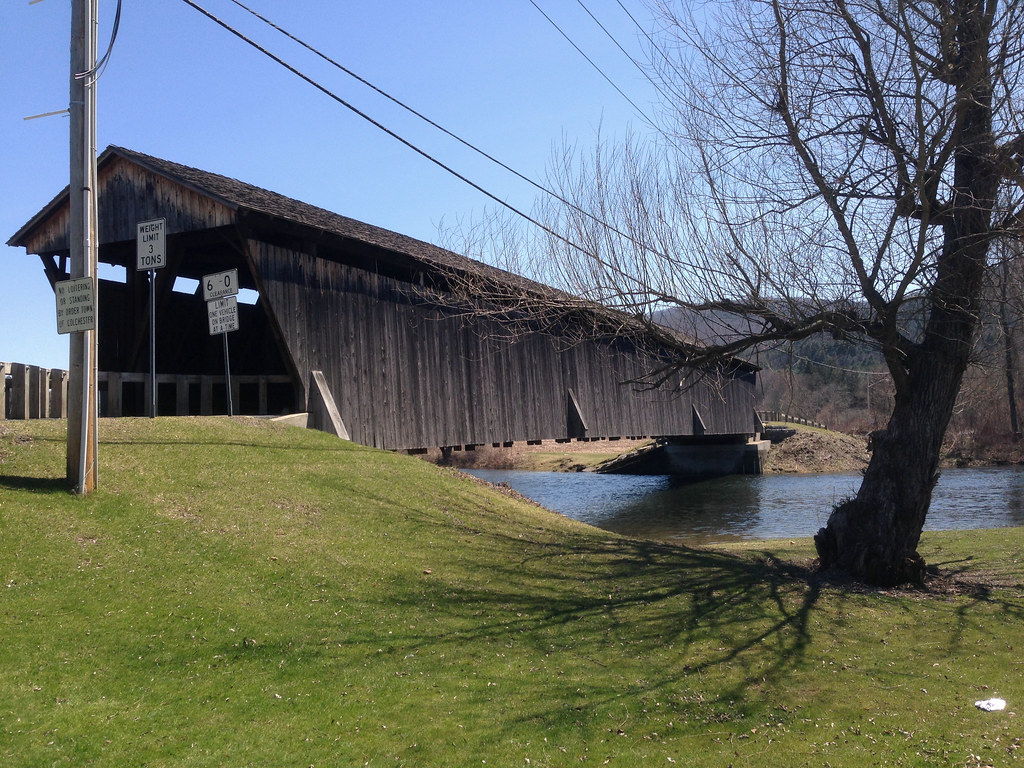 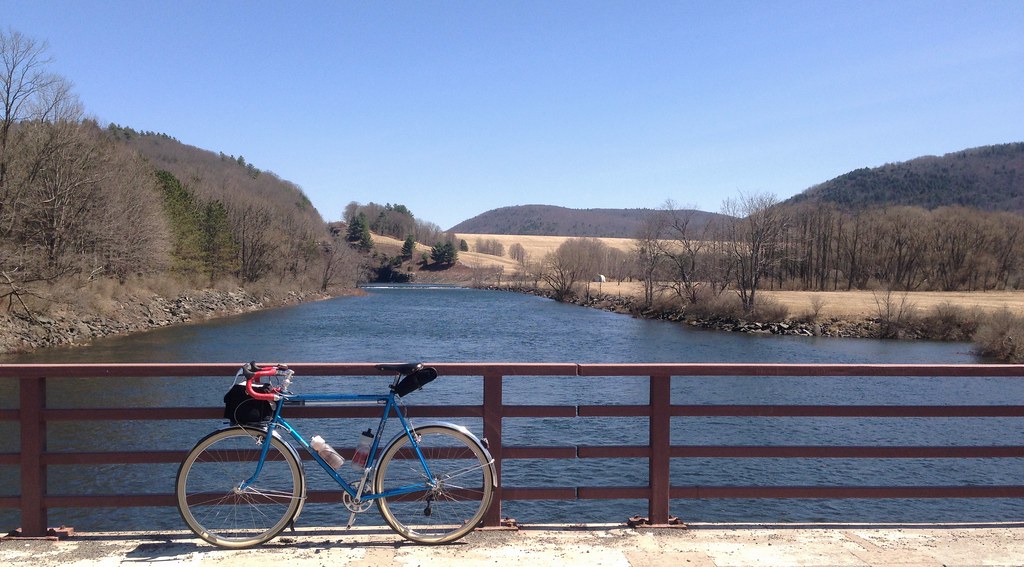 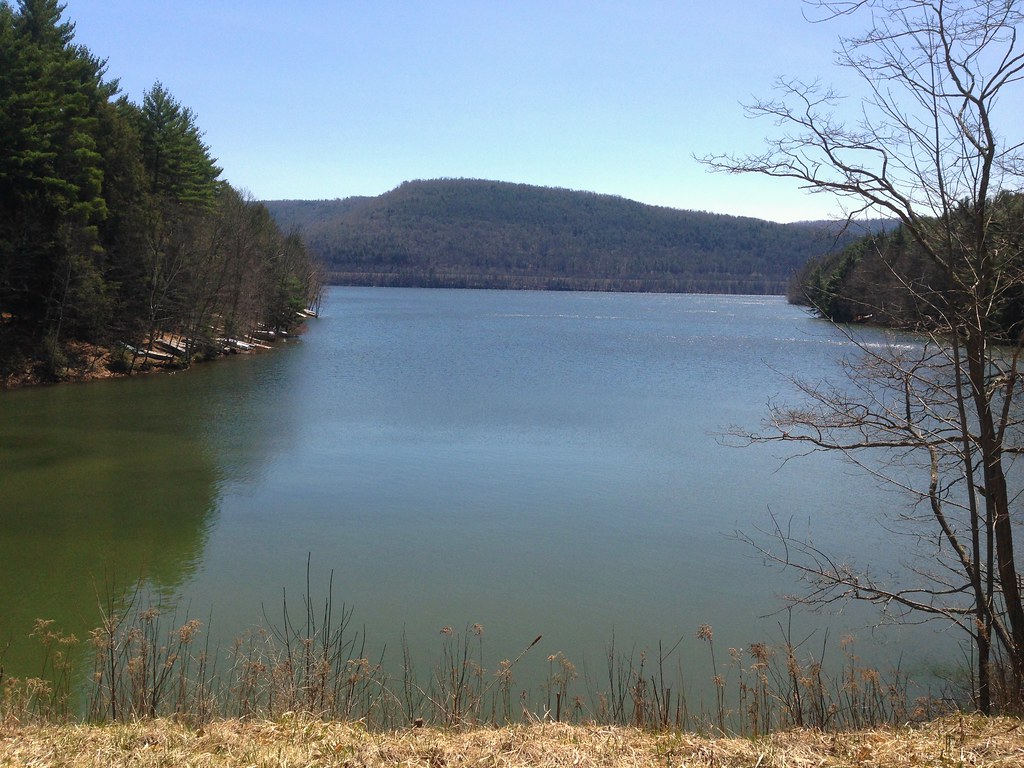 From the Pepacton, there’s no way to get back to Bloomville without going over another mountain with at least one cat 3 climb. For the return I took Huntley Hollow Rd to Fall Clove Rd to Maggie Hoag Rd– each of these roads is a milder climb than Basin Clove Rd, but the first two still qualify separately as cat 3 climbs and collectively the three roads accounted for 2/3 of the total climbing, in just 1/3 the total distance of the route.

Fall Clove Rd is a beauty. Long and winding, with lots of moderate ups and downs, none too intense, and lots of pleasant pastureland views.

Maggie Hoag Rd, the last dirt segment and last climb of the route, was hard. Not according to the elevation profile, but because by now I had exhausted my reserves. Here it is (head turned backwards again): 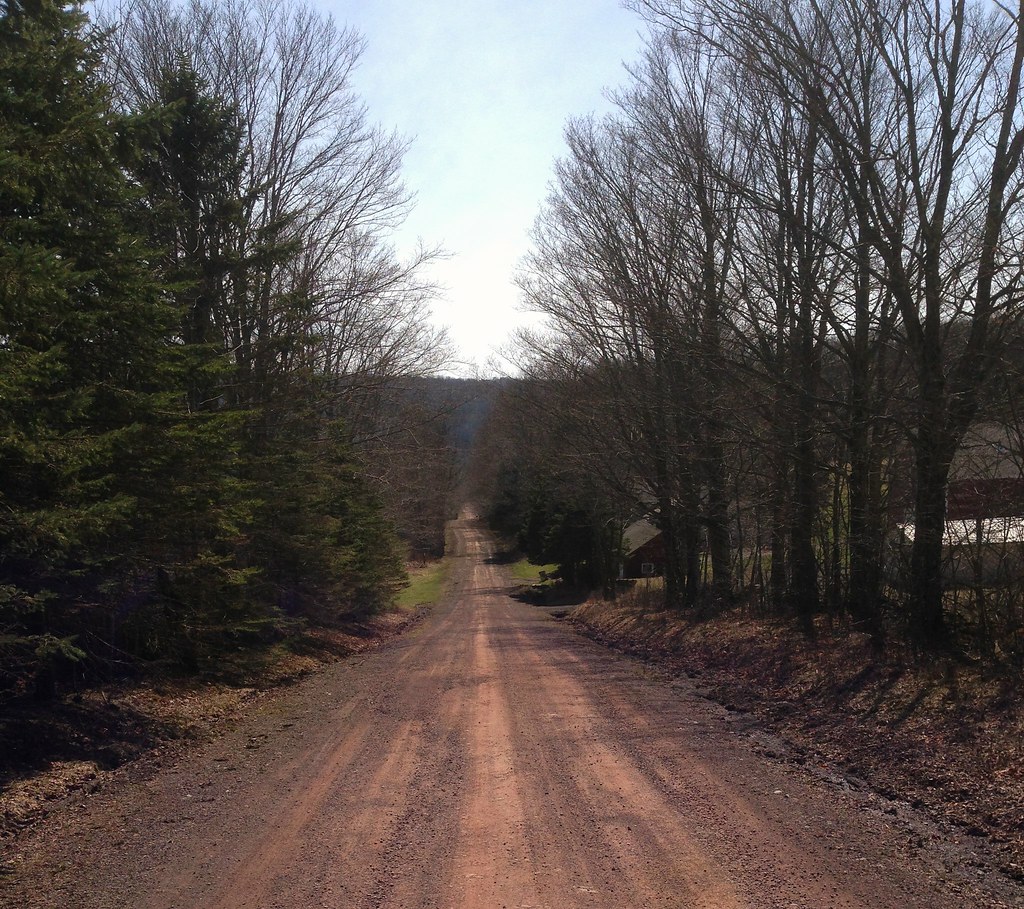 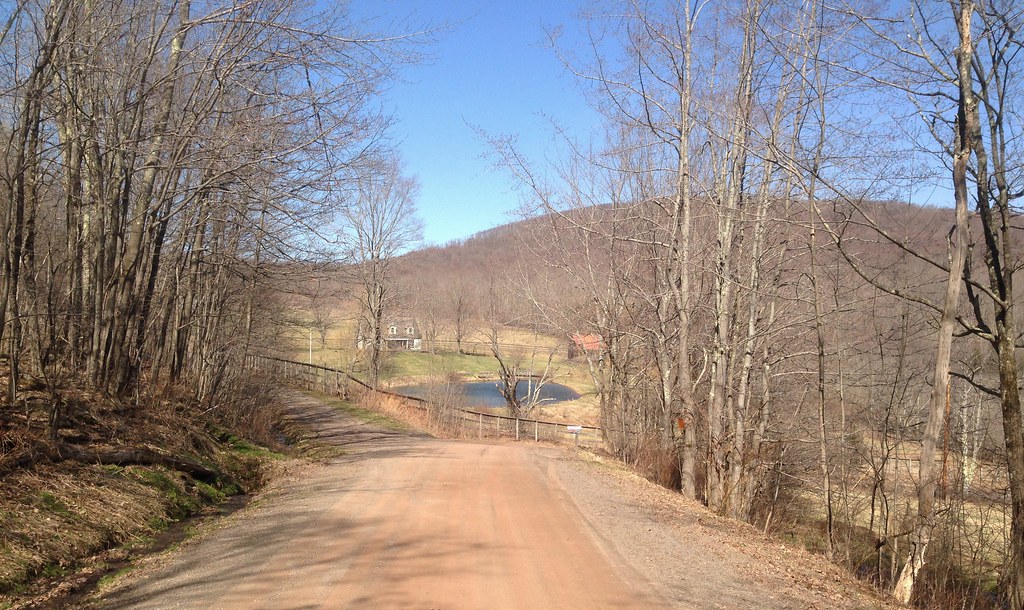 Back in Bloomville, I realized that in just a few more weeks the dreary remains of winter will have finally vanished, having yielded to spring’s new growth, and by the time I get another ride in, everything will look different. And just as slowly as spring marches on toward summer, the sound of water will diminish.  And I’ll miss it.