Not even six months ago—and being of the decidedly entrepreneurial bent (in my entire life, I’ve only been “employed” by someone other than myself for 6 months)—I was considering getting into the tire business myself. Not as a huge money maker, but instead because I thought there was no reason why someone couldn’t make a clincher as nice as my favorite tubular, the FMB Paris-Roubaix 25 mm. I even went so far as to start researching the equipment needed and scoping out sites for a mini-factory. I figured I’d make a little money, employ 5 or 6 people in upstate New York, and most importantly get the tire I wanted. The tires would be expensive, sure, but no more than a high-quality tubular and they’d be made in the US.

I had heard rumors of a new ultralight tire from Compass that was supposed to ride like a tubular, so I snapped up a pair of 32 mm Grand Bois Extra Léger tires, literally within minutes of them becoming available at the Compass Bicycles site. Compass has finally started using Priority Mail, so the tires arrived within a few days of ordering (they used to use regular post, and things would arrive in 7 to 10 days, if at all) My initial feelings about the tires before they arrived were mixed…although I was excited to get what might be a truly superb clincher tire, there would be no need for me to manufacture my own.

When I opened the package, it was apparent right from the beginning that there was something different about these tires. The sidewalls are so flexible that they actually wrinkle when unmounted—something I’ve never seen before except in the highest-quality tubulars.

They mounted up relatively easily, although I had to use a tire jack to get the rear tire on. Later, when my latex tubes arrived, the tires had stretched enough to get on and off by hand. This is in sharp contrast to the Challenge Eroica tires that I purchased and subsequently returned—those tires were so tight that I couldn’t even jam a tube under them. 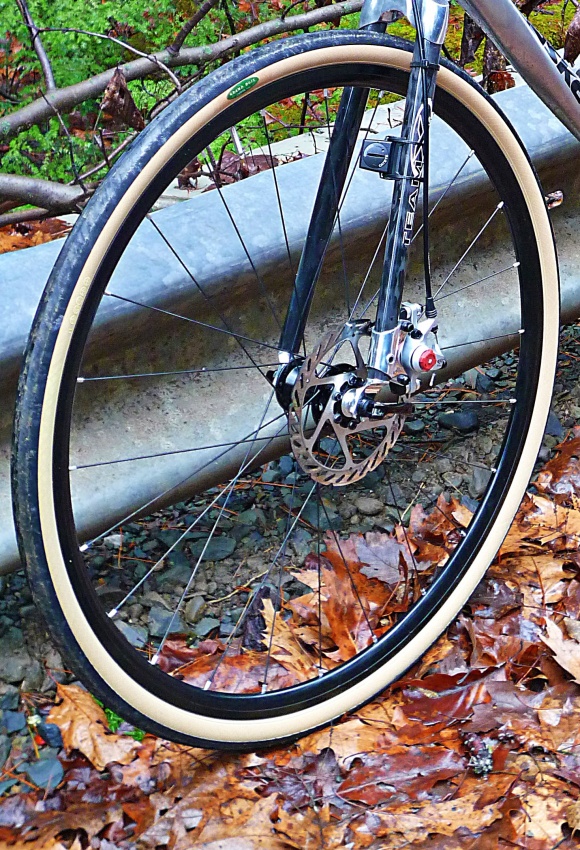 I pumped the tires up to 60 psi front and 65 psi rear (I weigh 145 lbs) and went for my usual 18-mile lunchtime loop with 2000 feet of climbing. It was a revelation. All traces of road buzz were eliminated relative to the regular Grand Bois 32s that I have on another bike. I suspect the smoother ride and reduction in road buzz made me feel a little slower than usual. However, my speed on multiple days on this loop averaged +0.3 mph of my usual speed. I’m not ready to say that they are any faster, but they are unambiguously more comfortable than the standard version. Even better with Challenge latex tubes.

The Grand Bois Extra Léger tires are available in 23 mm, 32 mm, and 42 mm. I think that’s an unfortunate range of sizes. 23 mm will fit on most race bikes, but many people (and everyone I know) are going with 25 mm or 27 mm tires these days. If Compass cares about selling tires, they would make a true 25 mm Extra Léger tire. Not 26 mm for the simple reason that many who own race bikes would reject it out of hand because they will think it won’t fit on their bikes.

I’ve had a chance to ride some really good clinchers and tubulars. Because these are 32s, it is impossible to do a direct comparison with tires other than the regular Grand Bois 32. However, based on what I’ve seen I’m confident that the 23s will ride better than any other clincher in the 23 to 25 range, and will probably provide as close to a tubular experience as it is possible to get on a clincher. I’m going to buy some Extra Léger 23s and compare with other tires in the 23 to 25 mm size range.