On Wednesday, Doug and I set out on a planned 101-mile route, starting from his place in Woodstock, New York. I had also asked my friend John along, but the night before he informed me that he had picked up a bug from one of his kids, and was unlikely to make it.

Since the route was long enough as planned, my girlfriend was kind enough to get up early and drive me and my bike to Woodstock for the start. The plan was to complete the route and then ride home, making it an even 200k for the day…as you’ll see, that didn’t quite work out!

The day started out promising. Low 40s, lots of fog and maybe a tiny bit of mist. The forecast was for 59 degrees, maybe some rain in the afternoon. All in all, just the way I like it. The route from Woodstock to the Rhinebeck Bridge was mostly downhill, so we hauled ass to the bridge for our first crossing of the Hudson. As you can see…foggy.

As we were crossing the bridge, I heard something behind me, and turned around. There was John, who was actually waiting for us, as planned, at a gas station just south of the entrance to the bridge. He had texted me a little earlier, when we were already underway, and I didn’t check my phone. The remarkable thing is that he had just gotten over whatever he had, and he was riding fueled only by a single pancake. Even so, he was clearly faster than either Doug or myself. Thanks for being patient!

The route crosses shortly thereafter into Columbia county. Although I’ve done a lot of riding in Dutchess, this was my first time in Columbia county for any reason. 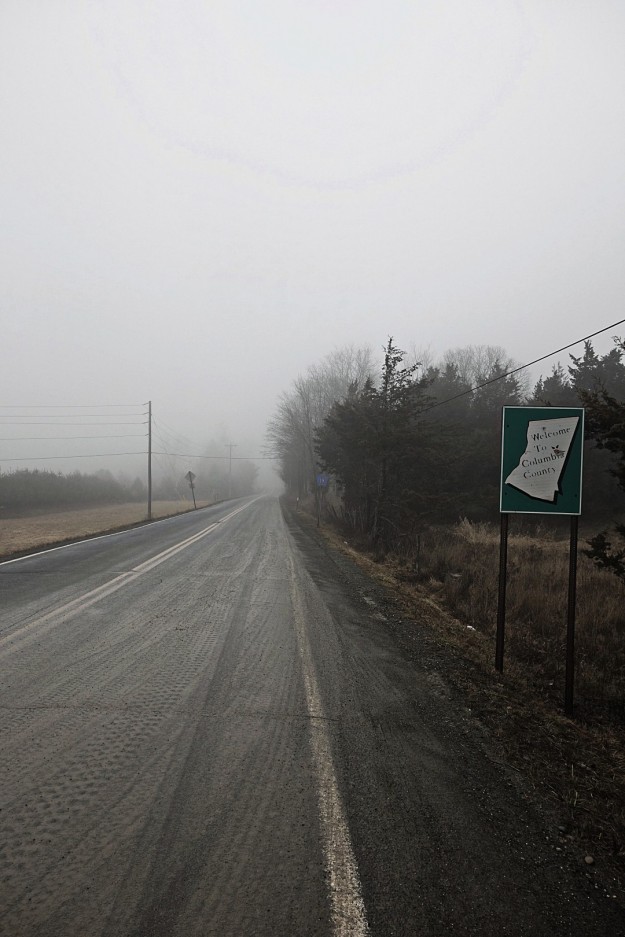 Columbia county, unlike its counterparts Ulster and Greene on the west side of the river, is gently rolling farmland. I think it will be beautiful during the summer, and a nice change of pace from grinding up and screaming down hills nearer to me. 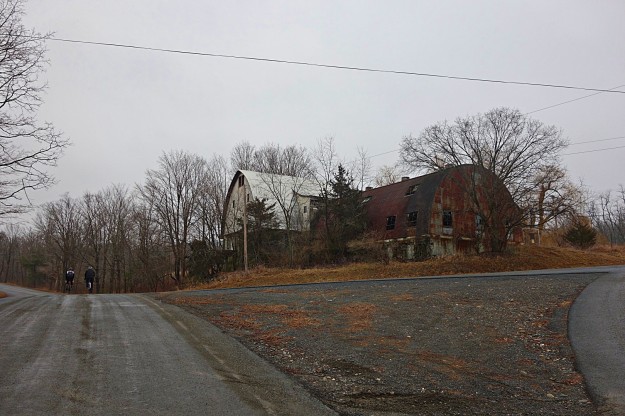 We hit a lot of strange semi-gravel roads. I’m not really sure if they were gravel, or regular roads covered in gravel and general filth. 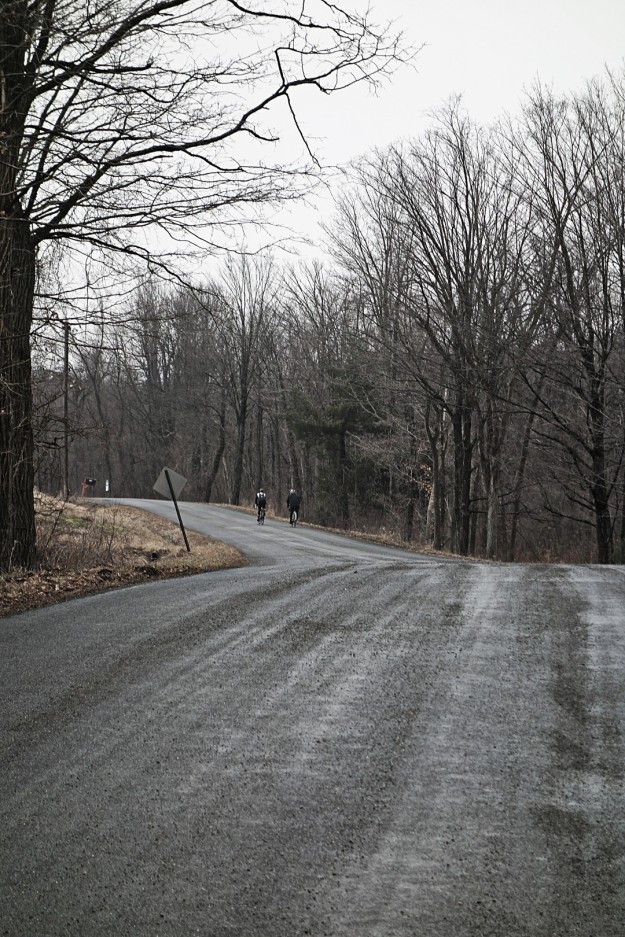 In any case, they were dirty enough to result in some nice skunk stripes. Doug was sensible, and rode a bike with fenders. 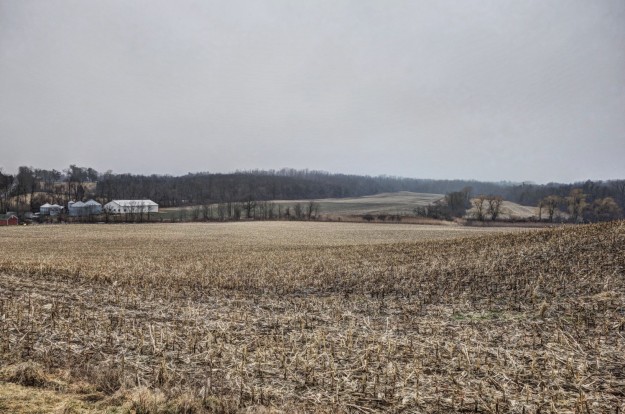 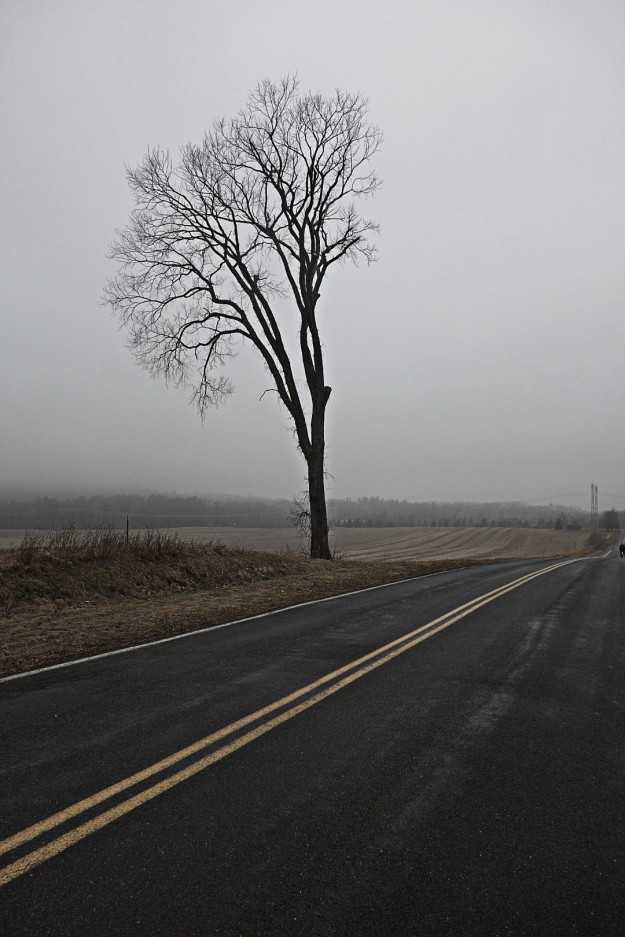 Followed by a second crossing of the Hudson about 35 miles north (or about mile 50 on the route) on the Route 23 bridge. This picture looks like more like a still from Deadliest Catch than anything that should be in New York. 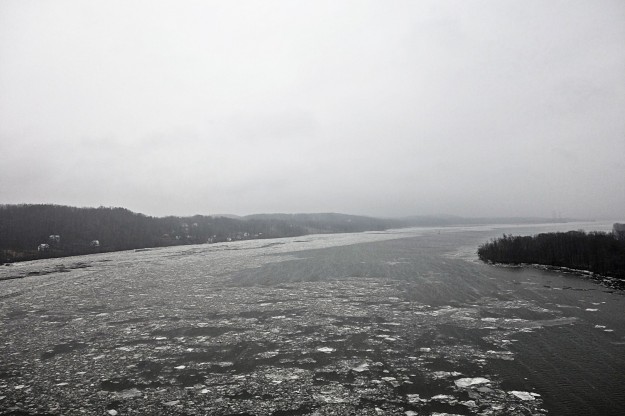 Watch out for the expansion joint on the bridge, it will eat even the fattest tire. Doug took it at an angle and survived. I actually stopped and duck walked over it because I wasn’t going fast enough to jump it.

We stopped at Pizza and Pasta on the Catskill side of the bridge. Yes, that’s the name of the restaurant. However, they also offer a simulacrum of Mexican food if that’s what you’re craving after 55 miles. We parted ways with John here.

So…that was the first 55 miles. The weather deteriorated rapidly, falling into the upper 30s, accompanied by a freezing rain. Compounding the issue, there was a 20-30 mph intermittent headwind driving the rain directly into our faces, and fog started to descend. I’m fine with all of that except the heavy fog, especially since the last few miles of the route are on a heavily trafficked road. So we abandoned our plans to complete the route, ending up with somewhere around 77 miles for the day. I also abandoned my plan to ride home, and I called my girlfriend to pick me up. I’m actually a little embarrassed…the only other time I’ve abandoned a ride was in 2010, when traffic from 9W was rerouted onto my route due to construction (worst ride ever!).

As it turns out, that was my best decision all week. As we were driving home, the fog became so heavy that we had to crawl along at about 25-30 mph. There was one panicky moment where we couldn’t see the road at all. I can’t even imagine how I would have survived that on a bike.

Every ride is a good ride. With that said, I’m going to have to give this one a dissatisfactory rating. But it’s not the route’s fault, nor is it the company’s fault. I blame the lyin’ sonofabitch at The Weather Channel.

Like all the other routes I’ve published here, this one is probably worth the trip. It’s a beautiful ride through rolling farmland, and I’m sure it will be gorgeous in better weather. It is different from my usual routes in that there is easy access to services and plenty of places to stop along the way. Here’s the route, but keep in mind we took an alternate route back that cut off some miles.

Now I’m off to Rome to talk about the role of the sympathetic nervous system in a whole bunch of diseases—hypertension, diabetes, sleep apnea, etc. Then I return for one day, and then I’m off to Arizona. I rented a Specialized Roubaix there and am planning a 200k in the mountains. I’m looking forward to the ride, less so to the bike. I’m spoiled.

4 thoughts on “The Ride of the Damned: Hudson Double-Cross”