Today we have a guest post from Anton, also known as Somervillain. Anton lives in Boston, but has a summer home in Delaware County, New York. After reading this post, it’s clear that I’m going to have to step up my game, both in terms of quality of writing and photography!

The Catskills have a plethora of unpaved rural roads and mountain passes with breathtaking vistas, valley farmland set against rocky hills. This is the backdrop that attracts New Yorkers, many of which own second homes in the area.  But decades of a withering local dairy economy create a poignant juxtaposition: tidy seasonal second homes interspersed among victims of rural decay, crumbling dairy farms either face inevitable decline or reinvent themselves in a fledgling agro-tourism economy.

For cyclists, there are endless opportunities for off-the-beaten-path exploration. A day on the bike and you can count the vehicles that pass you on two hands. Paved secondary roads lead to red clay dirt carriage roads shaded by overarching tree canopies. (The characteristic fine, silty red dirt gets its color from the Marcelus Shale, upon which much of the Catskills sits).

The Catskill Scenic Trail is a 19-mile hardpack gravel rail-to-trail easement that runs between Grand Gorge and Bloomville in Delaware County, on part of what used to be the Ulster and Delaware Railroad that ran between Kingston and Oneonta. It offers stunning scenery as it bisects farmland along the mostly flat shoulders of the West Branch of the Delaware River. In part due to it’s relative flatness, and in part because of its promotion by local tourism groups, it attracts recreational cyclists, skiers, joggers and equestrians.  While personally I find the flatness of the trail unsatisfying for anything beyond a few miles, it serves as an excellent launching point for cycling excursions into the surrounding hills, and it’s fun to mix portions of the trail into extended dirt road loops.

Although I live full-time in Boston, I have a vacation home in Bloomville and enjoy stitching together dirt road loops in the area whenever I’m up there, usually during vacations in the summer or on extended weekends. I just kicked off a two-week vacation by riding an easy 36 mile route which begins and ends at the Catskill Scenic Trail head in Bloomville. The ride started off with lots of unpaved roads, and over 2200 feet of climbing in the first 16 miles.  After that were seven miles of descent, and finally gentle rollers, mostly paved.

At the head of the trail is a discreet unpaved parking area.  I’ve never seen more than one or two cars parked there, a pleasant contrast to my usual experiences anywhere around Boston. It’s located just off Rt 10, a few hundred feet from the main crossroads of Bloomville. As I head out on the trail, I’m immediately received by a shady tunnel of overarching tree crowns. Soon this leafy greenway gives way to a clearing, and the realization that I’m riding–completely legally–through someone’s farm. Along the trail, tractor paths regularly intersect. Sod-covered bridges maintain continuity of the trail across meandering brooks. 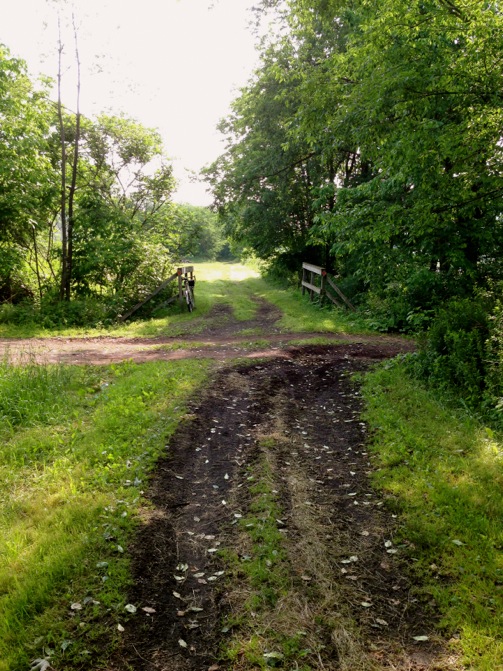 The trail follows Rt 10 with limited access points. About a mile into the trail, a tractor path provides a private cut-through back to Rt. 10. Across Rt. 10 from the tractor path is Kiff Brook Rd, a dirt road with a steady 4% grade over three miles, with a few short, steep climbs. Crumbling farms and hill-top residences dot the periphery. After the long, gradual climb, Kiff Brook Rd descends rapidly to its terminus at the bottom of a dramatic 16% descent on loose gravel. From there, a short segment of flat paved county highway connects to Roberts Rd, the second climb of the route. Here the road is chip-seal on top of the original red clay dirt, but I remember a time when it was still unpaved. Farms and bucolic pastureland line the road as it climbs steadily. As I near the top I look behind me and see a tractor cresting the previous hill behind me; it never catches up despite that I’m only averaging about 10 mph on this segment. 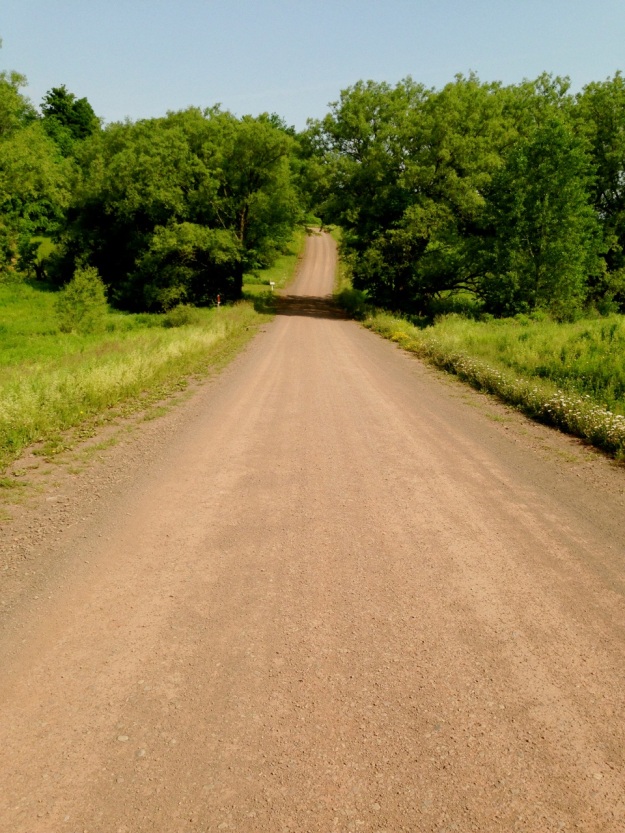 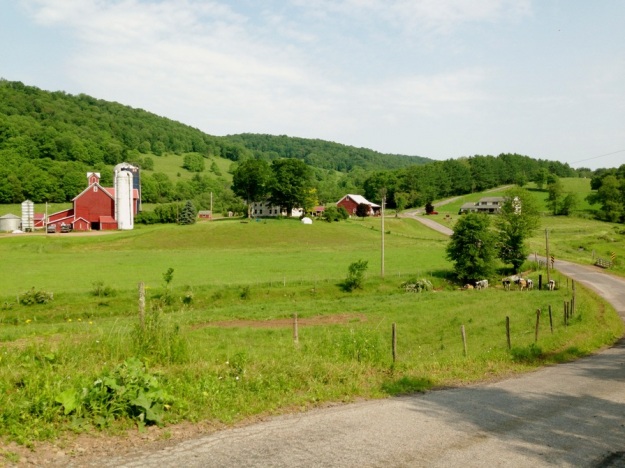 From Roberts Rd the route takes me back to dirt, descending Turnpike Rd into West Kortright as I pass by freshly hayed fields, hayrolls awaiting collection.  Not a village per se, West Kortright denotes an area of the township around a confluence of roads at the bottom of a hill, oriented around what used to be an old clapboard church. Renovated and repurposed, it’s now a performing arts center. 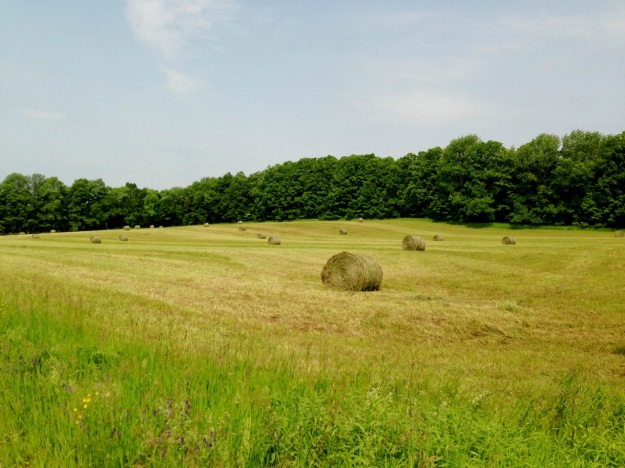 Continuing on Turnpike Rd past West Kortright, I’m brought to the final and steepest climb of the route, a short loop up Davis Rd, a gorgeous wood fence-lined dirt road dominated by a vary large dairy farm. On one side, cows take shelter from the sun under a cluster of shade trees in an otherwise vast pasture.  On the other side, hilltops occupy the distant horizon. This road challenges the traction limits of my 650B Hetres, with a 20% peak grade on large, loose gravel. No chance of pedaling out of the saddle without loosing traction, and I don’t even think about stopping for photos, figuring I won’t regain traction. When I arrive at the top, the views are breathtaking; good time for a break.

After Davis Rd the route loops back around, following some more dirt and ending up on Monroe Rd, the last dirt road of the route (with the exception of some more trail at the end of the route). Checkerboard fields fill the view, divided by grids of tree-lined roads like a patchwork quilt on a lumpy bed. A continuous two mile descent follows. I hadn’t ridden this particular road before and I experience a near panic moment when I realize it comes to an abrupt stop just as the descent reaches its steepest, at 15% grade. It T-intersects Elk Creek road, where I am greeted by grazing sheep against the backdrop of a steep forested hill. My house is just over the other side of that hill, a mile away as the crow flies, but the shortest rideable route to it is another eight miles. I don’t go this route, instead opting to take an even longer way back. 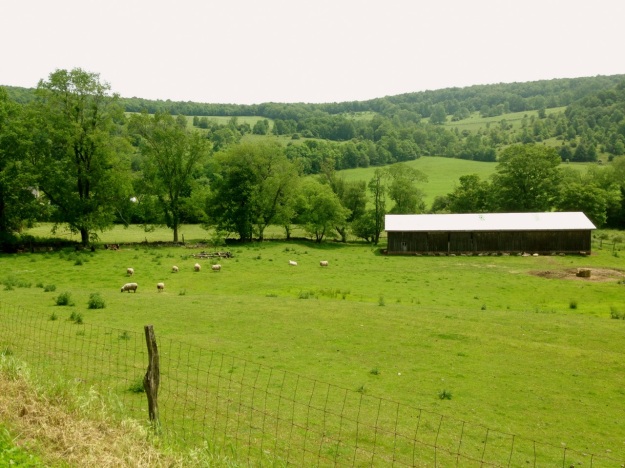 From here the second half of the route switches gears (literally and figuratively) and takes on an entirely different character, becoming less physically demanding. Elk Creek Rd winds along a valley nestled between two steep hills, with gentle rollers and an overall slightly negative grade, a relief from the hard climbing that marked much of the first half of the ride. It brings me Rt 10, a state highway with a 55mph limit. Rt 10 is a major north-south conduit through Delaware County that follows the West Branch of the Delaware river, so there is usually a steady flow of traffic. Fortunately I’m only on it for less than a mile (I count four cars but no trucks), when I cross over to the other side of the river on Fitch’s Bridge, one of a few covered wood bridges in the county.

Speaking of the river, I was informed that the region had gotten hammered with rain over the prior weeks, with reports of flooding. Two years ago a few of the towns in the eastern and southern ends of the Catskills were devastated by Hurricane Irene. Although the rain hasn’t been nearly as severe this season, I was concerned that some of the dirt road surfaces would be washed out, washboarded, or badly potholed by all the rainfall. I was pleasantly surprised to find the dirt well graded, properly drained and smooth– unusual in these parts, even without extended rain. But an unexpected bonus from all the recent rain was the burbling sound of running water, and it was literally everywhere. It could be heard but not seen: despite being 85 degrees and sunny, I heard water draining from the mountains, funneling into hidden streams and drain ditches everywhere I rode. It was the perfect soundscape to accompany the landscape. 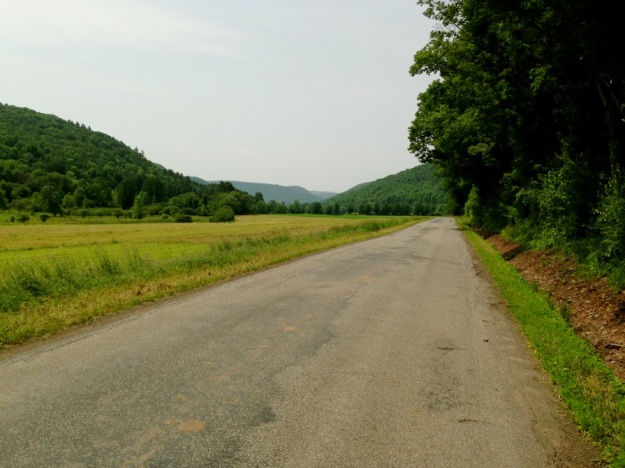 Crossing over Fitch’s Bridge to what is colloquially referred to as Back River Rd, this gently rolling road hugs the river back to Bloomville. Both Rt 10 and Back River Rd follow the river on opposite sides, but what Rt 10 is to traffic, Back River Rd is to farming: known as the West Branch Farm Trail, there is a higher density of roadside farm stands along this stretch than anywhere else in the county. There’s a farm stand on Back River Rd with raw milk gouda that I decided I wanted but it’s a few miles past Bloomville, so I continue past Bloomville on Back River Rd. After I slip the $6 in crumpled one dollar bills from my jersey pocket into the Folgers can and take my wedge from the fridge that appeared to be at least half a century old, I continue another mile or so and catch another tractor path shortcut to the Catskill trail and follow it for the remaining five miles back to Bloomville. 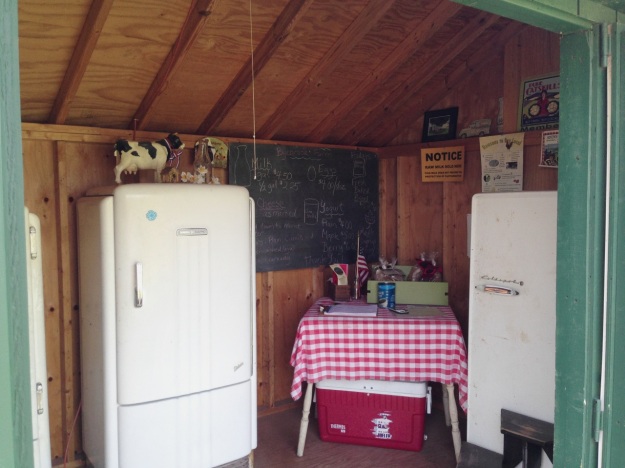 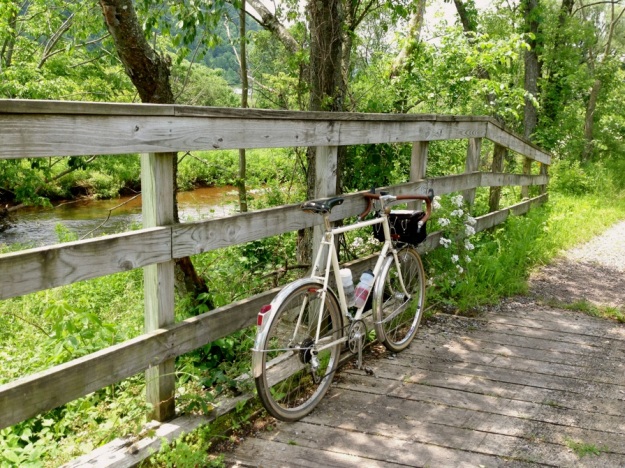 Back in Bloomville with a thoroughly dusty drivetrain, I stop in at the small cafe at the crossroads of Bloomville for an espresso and a bite to eat. I reflect back on the mental accounting I did of the number of vehicles that passed me along the route. Alas, the two hand rule was broken: 14 vehicles in total had passed me, but then four of those were on one mile of Rt 10. I don’t count the tractor that never caught up to me.

Full route, with unpaved segments drawn in red, can be found here.