John S here. Remember me? I used to post ride reports on this blog last winter. I’m back!

Sun getting low over the ridge, looking west from Springtown Road.

Where have I been, you ask? Mostly I’ve been training and racing. I haven’t wanted to post race reports here. To be honest, it’s mostly because I hardly ever have photos to go with the story, and nobody cares about anything on the internet unless it has pictures.

But, I can recap. My race season went as well as I could have hoped for. I upgraded to cat 3, which in the Northeast generally means you are good enough to race with the pros, but not good enough to beat them. The highlight of the season was winning at Crybaby Hill, which is one of the top crit races in the country. There’s a jumbotron and everything!  I also had a decent finish at the NY state masters road race championships, 8th place in the medals competition.  The winner was a 7-time national champion, one of those guys who’s just at a different level.

Now the road racing season is over, so I’ll be posting ride reports again. I will probably do a couple of cyclocross races just for fun, but at age 46 I don’t feel that I can maintain top racing fitness year round. Fall and winter are for taking it easy and preparing for the spring races.

The only event left on my calendar is the Gunks 10,000. My buddy Larry hosted the first version of this ride last year, and he’s doing it again. It’s a ride all around the Shawangunks, just over 100 miles with over 10,000 feet of climbing. It’s styled after a fondo: mostly a friendly group ride, but with 10 climbing segments defined on Strava. Larry crafted a really nice trophy out of a chunk of Shawangunk conglomerate, with a plasma-cut cyclist silhouette climbing up the side. The rider with the fastest combined time on all 10 climbs, which adds up to about 2 hours of climbing, gets his name added to the trophy, which lives at the Bicycle Depot in New Paltz. It’s like the Stanley Cup of the Gunks. The Gunky Chunk!

The Gunks 10,000 includes three climbs west of Ellenville that are not technically in the Gunks, though you can see the Gunks from there. Today I set out to ride those three climbs, along with Ferguson Road, a steep dirt climb to the top of the southern ridge. I didn’t plan to do the whole Gunks 10,000 route, but the ride did turn into a bit more than I anticipated…

I started from home and worked my way east, immediately crossing the very northern tip of the Gunks on Mountain Road in Rosendale. Then south toward the town of Accord, eventually ending up on Tow Path Road. This is a spectacular, long rolling winding road that follows the rocky Peterskill creek along the western rim of Clove Valley.

The rocky bed of the Peterskill Creek. The creek is actually running down the long crevasses in the rock.

Just for fun I rode hard up Lawrence Hill, a steep dead-end climb that has just been paved. There would normally be a nice view of the Catskills from the top, but we’re just past the lushest part of the growing season, and the trees are top-heavy with overripe leaves.

Then up Stony Kill road, another five star country lane, and across route 44/55, which separates the northern from the southern ridge, and also marks the boundary of what I think of as my home riding area. South of 44/55 means a long ride.

South of 44/55 also means entering the town of Wawarsing, which is a significantly different demographic from the towns along the northern ridge. It’s a noticeably poorer area, and road conditions are frequently atrocious. I like a bit of pavé as much as the next guy, but historically you can count yourself lucky if you can navigate Foordemoore and Berme Roads into Ellenville with all of your fillings in place. Foordemoore Road, though, has just been PAVED OMG WTF LOL. It’s a long, gradual descent, and I was laughing out loud rocketing down the creamy new blacktop. The elation ended at Berme Road, though; it’s been patched a bit, but still a tooth-rattler.

Berme Road leads past a couple of prisons, a major industry in this part of Ulster County, and into the down-at-the-heels town of Ellenville. I know a number of interesting people who live in Ellenville, and I’m sure it has its hidden treasures, but to an outsider it mostly looks like a bunch of boarded up storefronts punctuated by billboards pleading for support for a big casino project, stuffed into a very pretty area between the highest part of the Shawangunk ridge, and a steep highland that forms a pedestal for the southern Catskills.

Once through Ellenville, finally I had reached the three climbs I came for, all leading up the escarpment of the highland, across a narrow valley from the ridge. Wintish Road was the first climb, over a mile and very steep, with sections well over 15% grade. At the top was a rewarding view back toward the ridge. 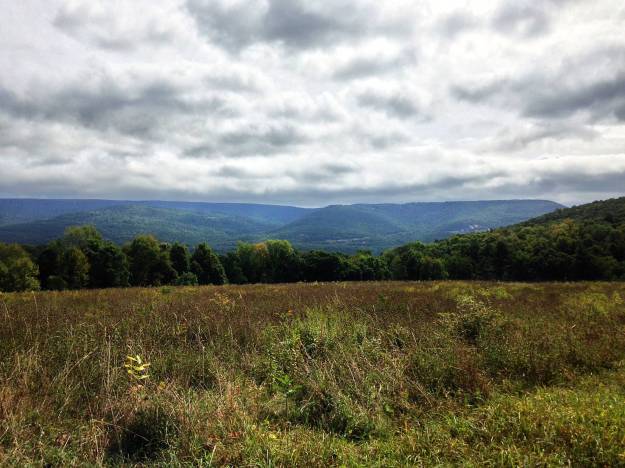 To the far right in the photo is Sam’s Point, the highest point on the Shawangunk Ridge, and not coincidentally the top of the longest climb in the county. That climb, South Gully Road, is part of the Gunks 10,000 ride, but I didn’t get to it today.

After doing another parallel climb back to the same viewpoint, I entered terra incognita; I’ve never ridden further south along this side of the ridge. (On the other side, I’ve ridden all the way down to New Jersey.)

The next 10 miles, miles 29-39 on my ride, were absolutely top-notch, brilliant single lane forested roads, descending and then following a rocky stream for a while and overall very enjoyable riding. I love riding new roads. 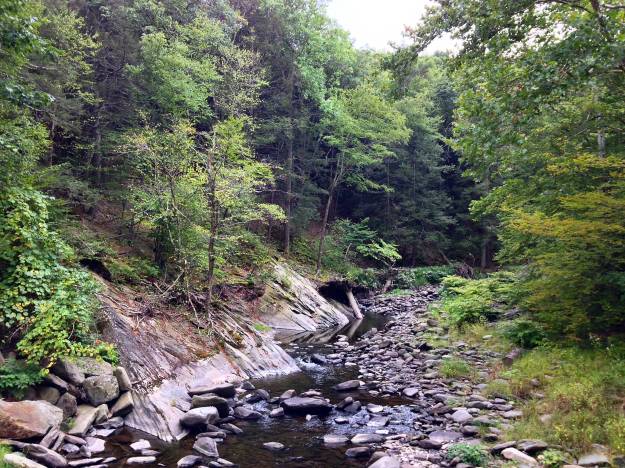 Sandburg Creek outside of Ellenville.

Then came the Budd Road climb, a 2+ mile stairstepper that turns to dirt and gets steep enough that it’s hard to stand without breaking the rear wheel loose. I made a decent effort on this climb, and the previous two. Not race pace, but aiming for a threshold effort, just on the happy side of where you start to feel like the fuse is burning.

Budd Road finally topped out and was immediately followed by a straight, smooth, very fast 3 mile descent. I was doing about 40 mph for most of the way down, and thinking, thank god I didn’t bring carbon wheels today.

I went back up to the top of the ridge on Ferguson Road, a dirt and beat-up pavement climb of over a mile that was quite a bit steeper than I remember from the last time I did it. There’s over half a mile at 12% average grade. By this point I had over 5,000 feet of climbing in my legs, much of it at a moderate effort level, but I wasn’t feeling too bad.

I’ve had chronic lower back pain for over 10 years, and normally at this point in a ride my back becomes a significant throttle on what I can do. But a month ago, at the recommendation of a physical therapist, I set up a standing desk in my office, and the results have been magical.

I stopped at the top of Ferguson to stretch my hamstrings and back very briefly, maybe 30 seconds, and there was no real pain at all. I had planned to just head back at tempo along the base of the ridge, but I felt fine, so why not do a bit more climbing.

I headed up the ridge again on Cox Road, now coming from the east side. I was just riding tempo at this point, and the climb was over before I knew it. Looking now I see that it’s over a mile at 8% average grade, which is a totally legitimate climb, but there were a number of flat sections and to be honest I was so surprised at not feeling bad so far into the ride that it hardly registers as a climb in my memory.

Back down the ridge at high speed on Route 52, then about 15 miles of rolling riding along the base of the ridge.

Looking northwest toward Gertrudes Nose, a prominent viewpoint on the ridge and a fine destination for a day hike.

I was feeling good enough that I figured I’d go over the ridge again, so I took South and North Mountain Roads up towards the Trapps. These are two of my favorite roads in the area, with a distinctive Gunks feel, rolling through oak and hemlock forest.

Past the Brauhaus and over the ridge again at the Trapps. I stopped at the newly rebuilt scenic lookout spot near the top to stretch for another minute.

The Near Trapps from the scenic overlook on 44/55.

Once over the top, I rolled down Clove Valley Road, a glorious 5-mile rolling descent through a gorgeous valley with constant views of the ridge rising above. We’ll do this road the other direction, as a climb, in the Gunks 10,000. 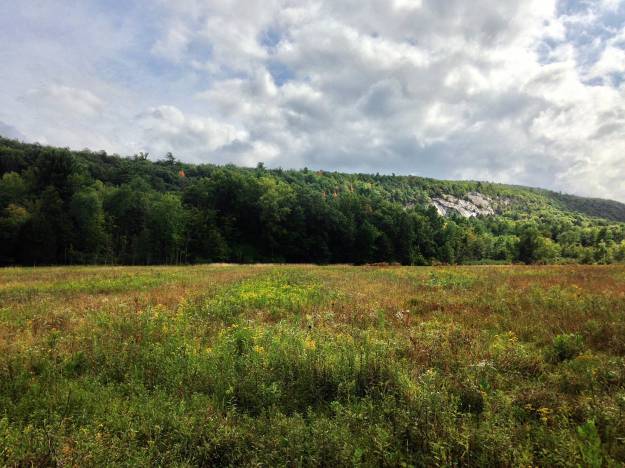 The Outback Slab, a relatively remote climbing destination on the back side of the Gunks.

About halfway down Clove Valley I noticed that I had over 8,000 feet of climbing in. Twice more over the ridge would put me over 10,000. Why not? I was feeling fine, really amazingly good considering the efforts that were behind me. Nothing at all was sore, not my back, not my legs, no saddle or foot hot spots. Everything was so copacetic that it almost made me worry if something was wrong with my brain, or my nervous system.

So, two laps up Mohonk Road. To me this is the iconic Gunks climb: 2 miles starting at 4% grade, steadily increasing to 12%. According to Strava, I’ve climbed it 116 times in the past three years. For these two laps, I was taking it very easy, just spinning up the climb in 34×28, for my 77th and 83rd fastest ascents out of those 116. (The slowest of all was last fall, when I paced my son up the climb at the slowest speed physically possible without falling over.) 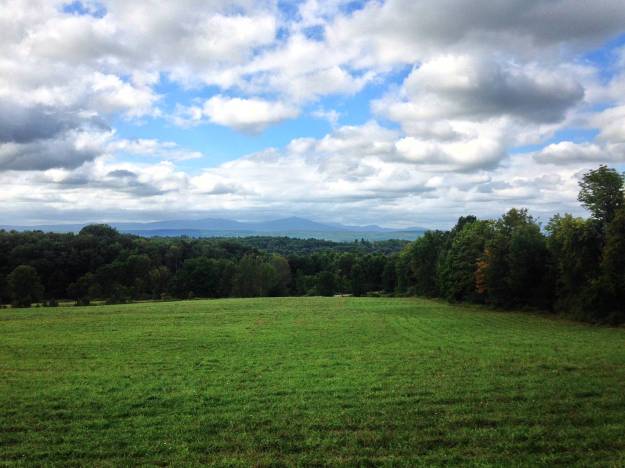 Looking toward the Catskills from Spring Farm, at the base of the Mohonk Road climb.

After the second ascent, I finished the last of my water. Only two bottles for six hours in the saddle, which is sort of ridiculous. It was overcast and cool for most of the day, just perfect riding weather. I stopped at the Mountain House golf pro shop at the summit, to defile it with my nasty sweaty self, and treated myself to a coke.

The flat homestretch down Springtown Road went by in a flash. I was only doing 16-17 mph, but still pedaling circles and feeling good. The shadows were starting to lengthen as the sun got lower over the ridge to my left… that’s the photo at the top of the post.

When I got to my driveway, my Garmin showed 9985 feet of elevation. Well, that wouldn’t do, so I passed by my house and rode about 100 yards back up Mountain Road to put a punctuation mark on the ride. The final total was 93.1 miles, 10,066 feet.

By the numbers, this was the hardest ride I’ve done all year. I’ve done longer rides faster, and rides with more climbing, but not this combination of distance and elevation. Yet somehow there was zero suffering, and even the next day my legs and back felt fine. It is amazing to me that a simple behavior change — standing instead of sitting at my desk all day — can have such a dramatic effect, not just on my back but on the whole system. If you’ve got back troubles, trying out a standing desk for a week or two could be a low cost experiment with a big payoff.

2 thoughts on “Shining Up my Saddle, Snake is Gonna Rattle — or — The Back is Back”