When I was living in New York City, I heard rumors of a climb…a climb so awful that people flip off the back of their bikes if they’re not careful. A climb that makes pros cry like babies and walk their bikes up the hill.

After a little research, I found it: Platte Clove Road, just west of West Saugerties. The climb is so steep—averaging 12% for 2 miles with maximum extended grades exceeding 22%—that professionals riding in the Tour de Trump had to get off their bicycles and walk. I set this as my goal ride for 2012. But, being who I am, I set out to conquer Platte Clove only 2 weeks after moving up here.

I set out late on a Sunday morning, with the intent of riding the 65 miles and being home in time for an early dinner. The route starts with a nice, easy, rolling warm up on Krumville Road. “Down the Lane” road was closed, so I took a brief 2-mile detour to get back on track (instructions below), spinning past the Ashokan Reservoir and some lovely scenery. 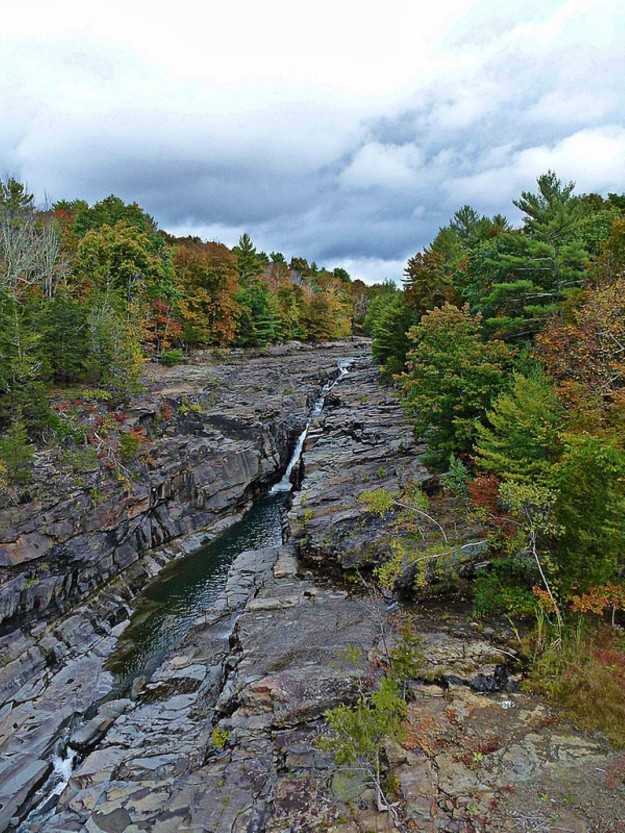 I stopped at a gas station in Woodstock to top up my bottles and get a little food. Past this point, there are few opportunities to eat or refill your water bottles until Phoenicia, so be sure to do so now. Here, I had my only encounter this year with another road cyclist. Cyclists seem to be an exotic species out here in the Catskills. Alternatively, the relative scarcity of roadies in the area might be explained by the fact that we’re more spread out than people riding out of NYC—on any decent weekend, there’s a bicycle traffic jam on 9W north from the George Washington Bridge. Depending on where you live it can take an hour or more of misery to even get out of the city on a bicycle, and 9W is unpleasant at best, particularly north of Nyack. You would think that some of them might consider taking a train to ride somewhere decent. Maybe there’s safety in numbers?

I waved, he waved, and I continued north on West Saugerties Road to my date with destiny.

Platte Clove Road is officially closed and unmaintained from November to April, but I don’t think anyone is going to stop you from riding it even in the off season. Just use some common sense and don’t try to climb it in inclement weather. And don’t ride down Platte Clove Road. There’s no guardrail, and even though the southern edge of the road is nicely shaded with trees, it’s a long way down if you blow a turn.

I am proud to say that I did not walk at any point. I am less proud to admit that my achievement was primarily attributable to sensible gearing.  Vanity gearing has its place on easy Bear Mountain runs from New York City, but out here it’s just not advisable, even if  you are an exceptionally strong rider. 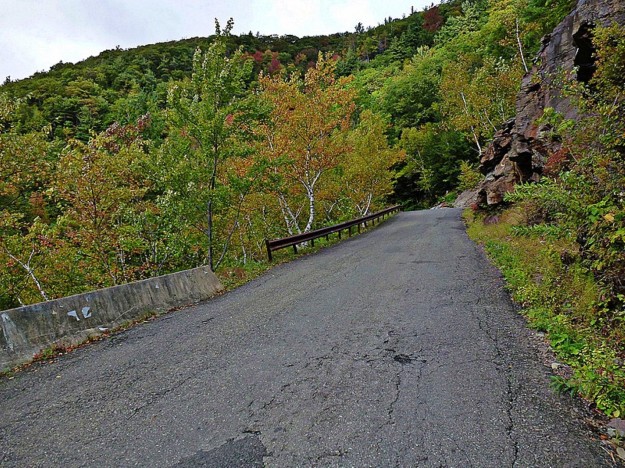 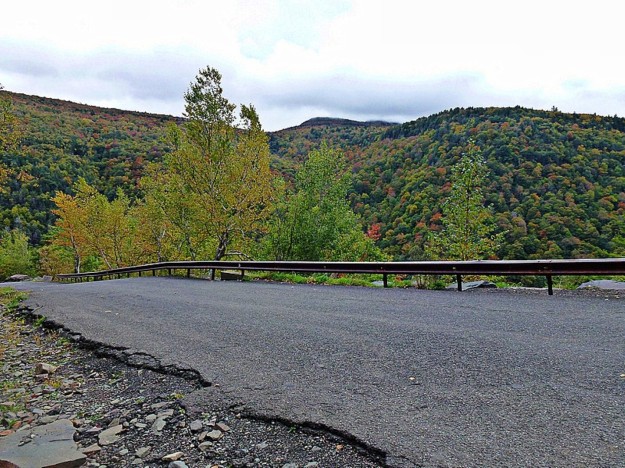 The climb is well worth it. The Clove is beautiful and has been the deserved subject of many paintings by Thomas Cole and other members of the Hudson River School. This view is arguably one of the most painted in the Hudson Valley.

Incidentally, you can also pick up Devil’s Path from Platte Clove Road. The aptly named Devil’s Path features 4 summits, little water, and is one of the toughest hikes in the Catskills. There’s a parking lot about halfway up the climb if you’re interested in hiking a section, just don’t bring children or pets, hikers are injured and some even die every year on Devil’s Path.

Platte Clove Road leads to one of the most inaccessible parts of the Catskills. At the top, you’ll find the Bruderhof (literally, “place of brothers”), a Christian community founded in 1920 by a Protestant theologian named Eberhard Arnold, his wife Emmy Arnold, and her sister Else von Hollander. Arnold was born in 1883, and at age 16 had an experience that he later described as God’s acceptance and forgiveness of his sins. He left the Protestant state church in 1908, and, as near as I can tell, joined the Hutterite branch of the Anabaptists. In 1920, he founded the Bruderhof in Germany, a Christian group that believes in living “in full community,” meaning that there is no private property. Seventeen years later, in 1937, the Nazi government ordered them to leave the country. They moved to England, but as German nationals during World War 2, they were offered the choice of internment or emigration. They chose to move to Paraguay, and finally–in 1954–to the United States.

The Platte Clove community, home to 250 people, was founded in 1990. It’s located on land formerly owned by the New York City Police department, which had built a resort hotel—informally known as “Police Camp” —complete with a movie theater, casino, bar, lounge, swimming pool, and ballroom. The Police Camp opened in 1921 and closed in 1983.

I was then treated to a cold rain. The camera went in a zip lock, so I didn’t take a photo; the following image is from the Platte Clove Community website.

The Catskill Bruderhof and the new Police Recreation Center are open to the public every day. I’m not sure if they will feed you, but you may be able to refill your water bottles.

After Platte Clove Road, you’ll ride over some gently rolling terrain high in the mountains. A nice recovery from the climb, and some beautiful scenery to keep your mind off the pain. 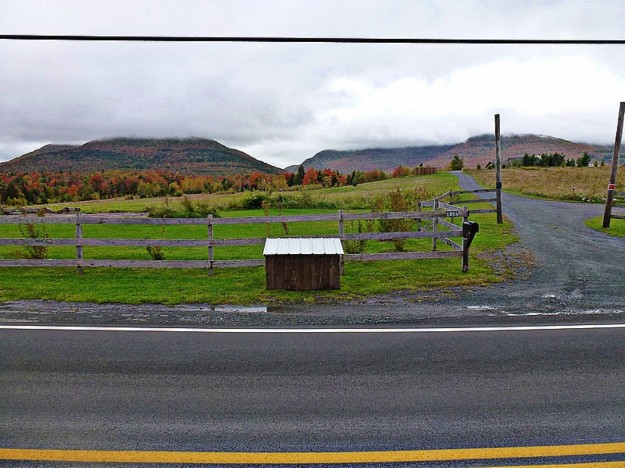 From there you’ll take a left onto route 214…

…and after a few more miles of a gentle false flat you’ll hit a 16.5 mile descent past Notch Lake and Hunter Mountain. At mile 46 you’ll pass through Phoenicia, which—despite its population of 306—hosts a number of good restaurants. As usual, I skipped a formal meal in favor of some Power Bars and a Coke in the local gas station. On your way out of Phoenicia, you’ll briefly follow Esopus Creek, famed for its trout fishing.

From there, you’re home free!

I rode 75 miles—about 10 miles more than the planned route. Although it was a short ride by my standards, the steepness of the climbs make it as tough as any single day ride I’ve done before or since. This is what I’d call a destination ride—it’s worth the trip and even a stay in a hotel in Stone Ridge or Woodstock. Here’s the original route without detours: 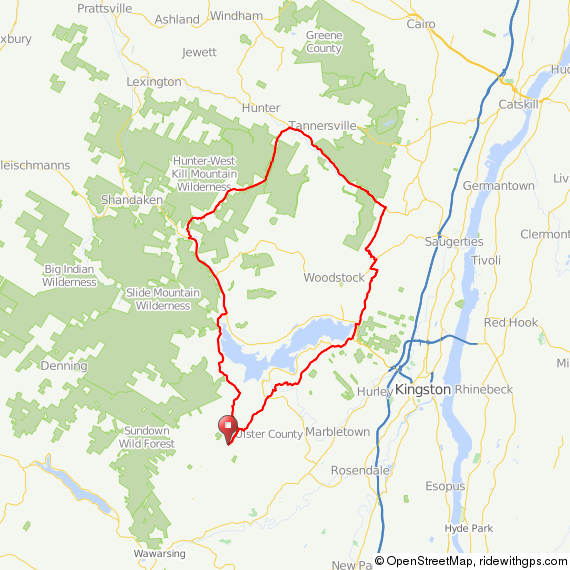 The Garmin file for the route, starting from near my house, is here. If “Down the Lane” Road between miles 5 and 6 is closed, simply take a left on 213, a right on 28A, and then a right on Beaverkill Road to rejoin the route. If you want to start in Stone Ridge, take this route to the start on Krumville Road. You could also start in New Paltz or Poughkeepsie (you will need to follow route 209 from Kerhonksen to Schoonmaker Lane, just before Stone Ridge, to pick up the route).

Enjoy, and let me know if you can make it up Platte Clove Road without a break! In a few weeks I’ll post my favorite 80- to 90-mile route out of Brewster, the last direct stop on Metro North. A summer classic, and perhaps one of the best rides ever. So good, in fact, that it is one of the few rides I repeat multiple times each summer.

20 thoughts on “Worth the Trip: Platte Clove”