Before we begin, though, I just want to note that my previous post was meant to be funny. Dry humor, you know? If you’re in a 5-hour drivers’ ed course you have to take your amusement where you can.

My friends and I have been riding the east side of the Hudson—mainly Putnam and Dutchess—as well as 9W up to Bear Mountain on the west side for some time, but we hadn’t gone farther north on the west side of the Hudson. In part, this was because of its relative inaccessibility, and in part because of a failure of our collective imagination. After all, there was a lot to explore on the east side, and all of it easily accessible by train, whereas the only way to get over to the other side was via the Bear Mountain Bridge, the Newburg-Beacon bridge, or the Poughkeepsie bridge. We didn’t think going over to the other side was worth the effort.

Of course, now I know that’s wrong. Ulster offers considerably more rugged terrain and is far less civilized than its counterparts on the east side of the river. All of which makes for great riding, if you’re not afraid of being far from civilization, a relative lack of services, and no cell phone contact in places. All in all, it makes for a more genuine adventure than riding in Putnam and Dutchess. Don’t get me wrong, though—the east side of the river makes for some fine riding in beautiful country…it’s just different and in some ways easier.

The route begins in Beacon, New York. It’s easy to get there from Grand Central Station—see the About page for train schedules and general guidance. You’ll go over the Beacon-Newburg Bridge to get to Newburg on the west side of the river. (This image is actually from an earlier ride where we attempted to go from NYC to Poughkeepsie. We abandoned in Newburg because, due to construction, all the traffic from the highway was rerouted onto our route…worst ride ever!). 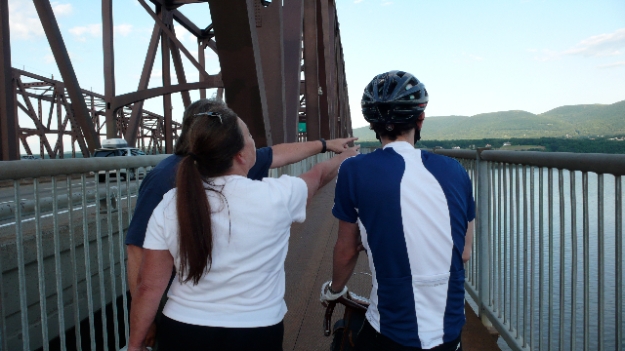 From Newburg, you’ll continue west to the little town of Walden. There is some traffic along the way, and a few crossings of busy roads, but overall it’s a safe and fast trip to the good stuff. In Walden, you can stop for drinks or food; I believe this roadside stand is open year-round. 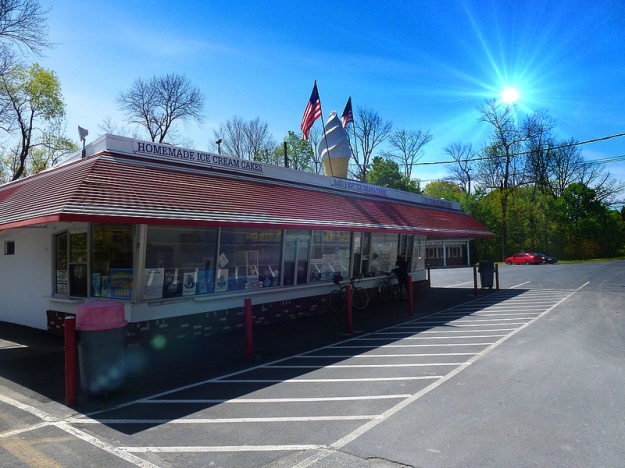 Finding the start of the bike path itself in Walden can be tricky. I redrew the route to make it easier. You’ll know you’ve arrived when you see this funhouse chute. If nothing else, it will give you a chance to practice your bike handling skills. It’s like getting on the south path of the GWB, times nine.

I recommend jumping the rail and riding the dirt path on the right. 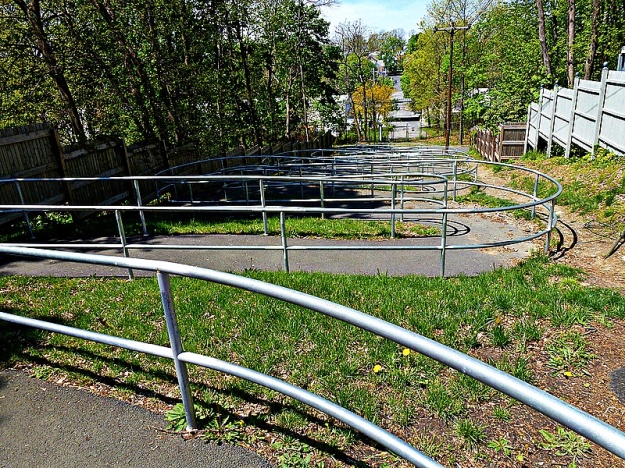 The first part of the bike path is paved and dead flat. Depending on your attitude and abilities, you can view this as either an opportunity to get it over with quickly, or a nice respite before the work begins (not that there’s much work to do on this route!) 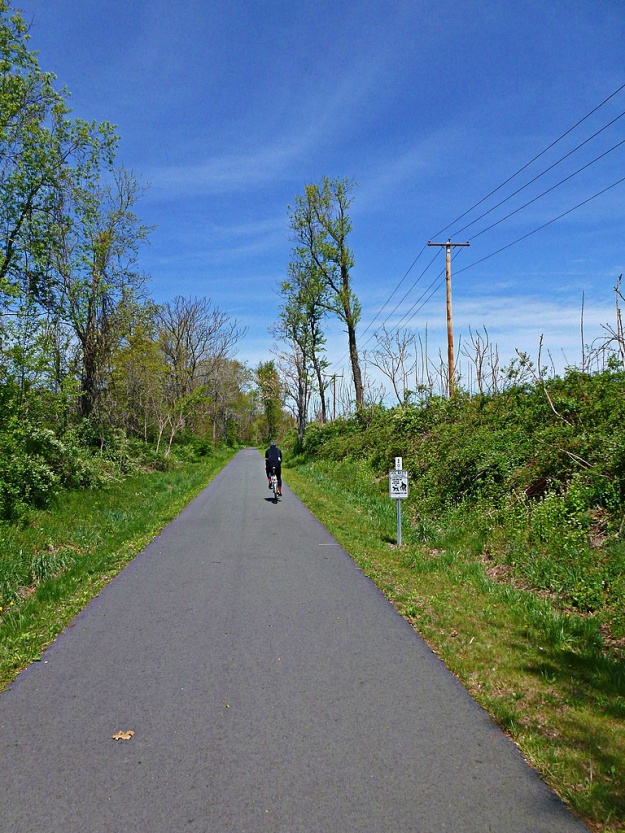 At about mile 18-19, you’ll arrive in Wallkill, home of the famous correctional facility. Some maps will show the bike path going right through the prison grounds, but sadly that is not allowed. You will need to detour around the prison. There are a few hills, but nice views. 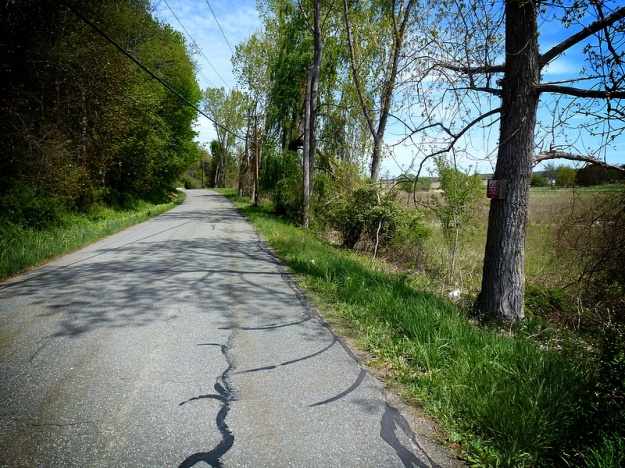 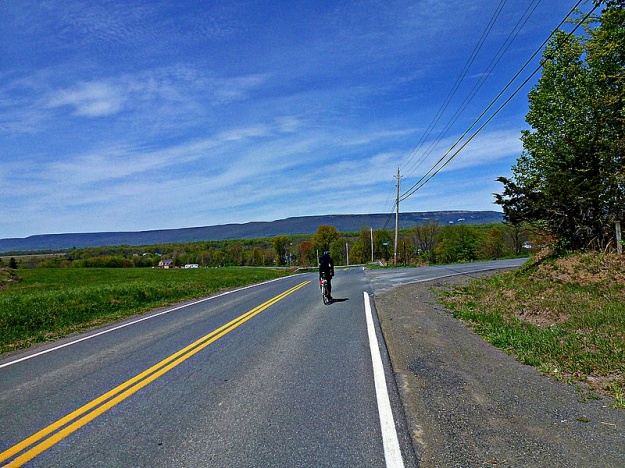 Here is where we encountered a helpful prison guard, who directed us around the prison. I’ll admit we looked suspicious riding around with our bags full of who knows what. Personally, I had a cake and a file in my saddlebag. Please don’t tell the man.

You’ll want to go up that hill on the right. 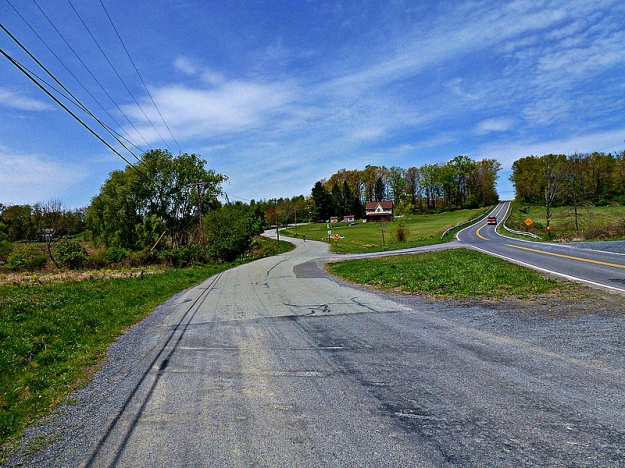 Make sure you turn on Dennison Road. 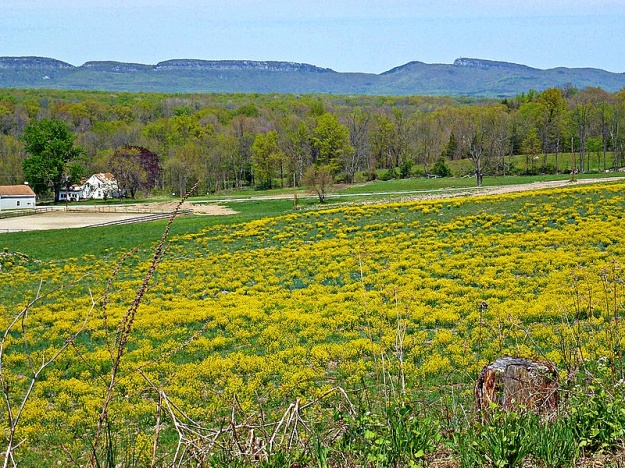 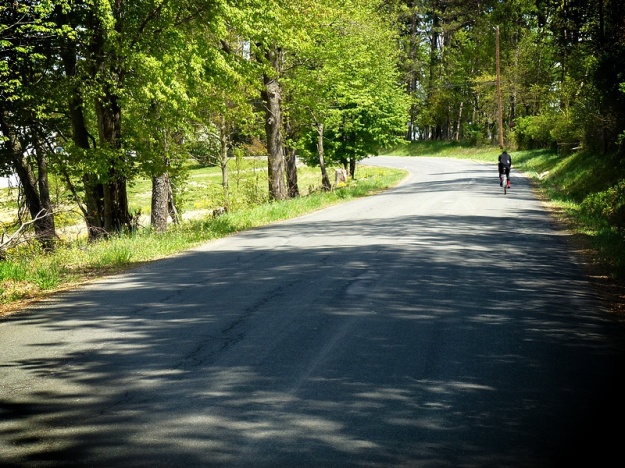 From there, it’s only about a quarter mile to the bike path, which–as you can see–is more of a cow trail in this area. I didn’t mention this earlier, but wider tires are a good idea, although, as usual, I rode the route on 25 mm tubulars. 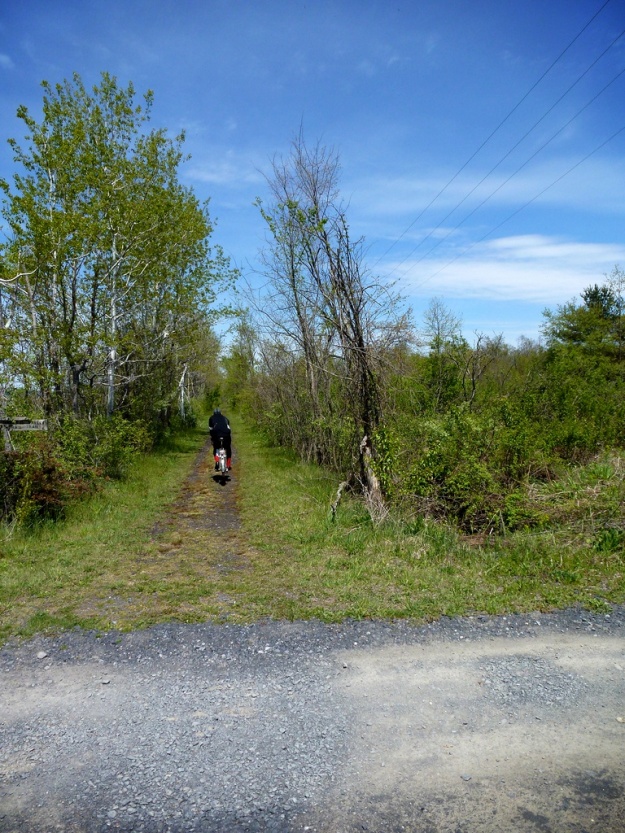 The bike path hides some baby head sized rocks, so perhaps it isn’t advisable to go this way in late fall, when the rocks and potholes are covered with fallen leaves. 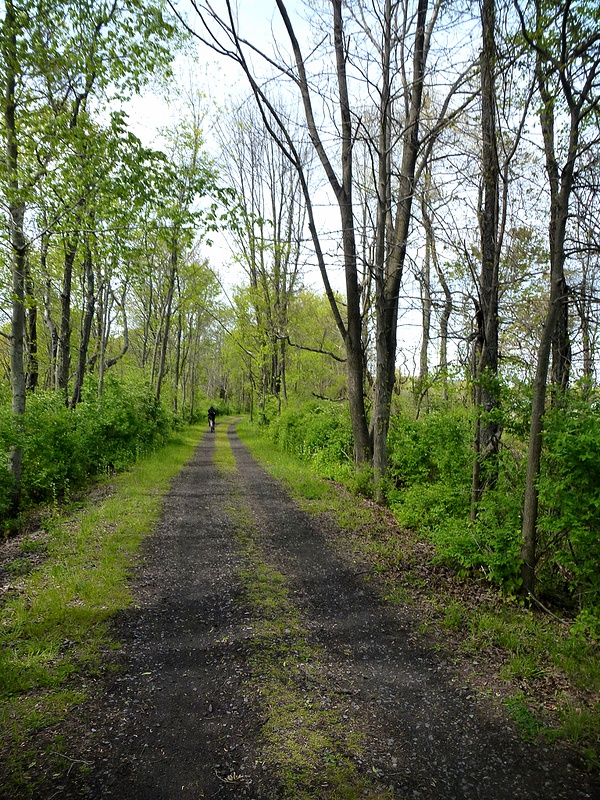 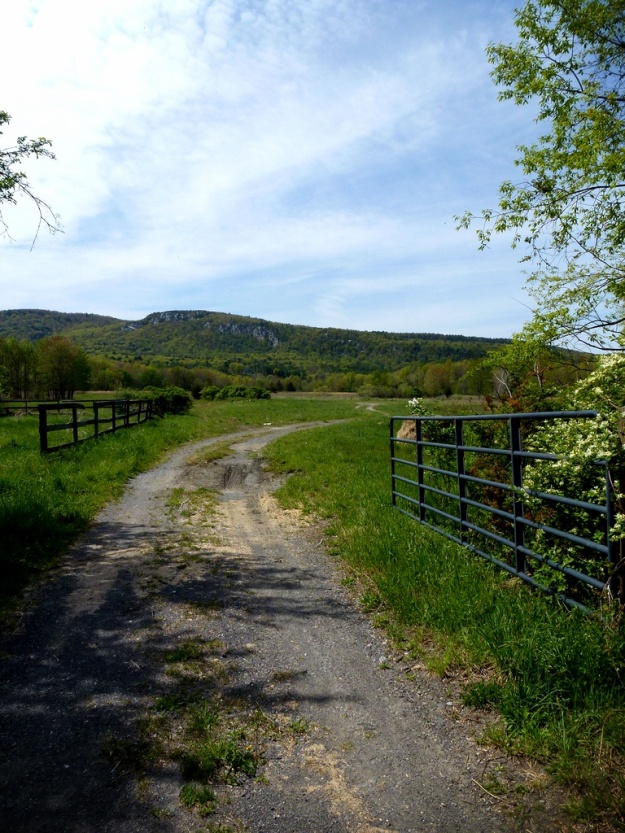 You’ll pass through New Paltz at mile 31, which has a number of excellent restaurants, and ultimately you’ll emerge in the town of Rosendale at mile 38, which also has several good places to eat. 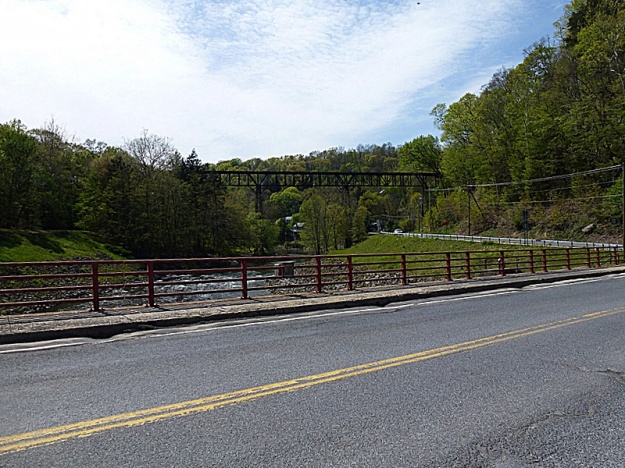 We stopped for lunch at Market Market Café (hours here), which has an outdoor seating area and was actually quite good. Note that the outdoor seating faces Route 213, so there is some traffic noise.

We had originally planned an out-and-back route, but we found the bike path far from challenging. We decided to return to Poughkeepsie the hard way. Luckily, Guy carries paper maps (and a fountain pen, of all things!) and he created a cue sheet to get back to the train station.

Here we are on the backroads to Poughkeepsie. 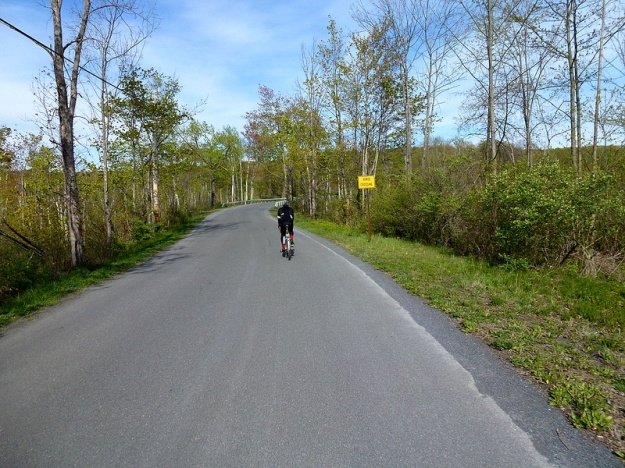 Where I took a picture of an extraordinarily handsome goat. 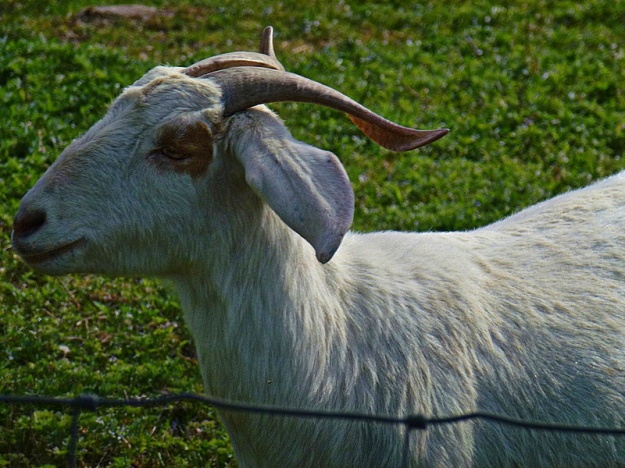 The route gets more challenging here, because you’re on real roads in the hills. The climb out of Rosendale is steep and long enough for the road to warrant a separate climbing lane for cars, and there are a few steep but short climbs along the way. Overall, you’ll do half of your total climbing (which is minimal—only 3300 feet in 55 miles) in the last 15 miles.

You’ll end in Poughkeepsie, where you’ll cross the world’s longest pedestrian bridge. This is a photo from the bridge, looking south. 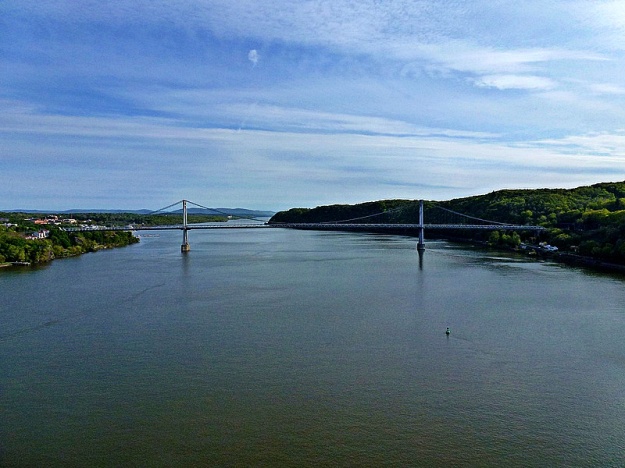 If you have dallied too long at–for example–the combined cheese/used clothes store in Rosendale, and have arrived after dark, the pedestrian bridge will be closed. No problem…just head south a quarter mile and cross the bridge pictured above. It’s actually easier to get to the train station from that bridge.

Is it worth the trip? Yes, depending on your needs and who you are riding with. Personally, even if I still lived in New York City I wouldn’t bother doing this again. It’s not challenging or remote enough for my tastes.

However, this route is a nice introduction to Ulster. It is fast, easy, and suitable for beginners in moderately good shape–or those who just want to go on a fun day ride. It includes a long segment on a very flat bike path (which I try to stay away from unless I’m riding just for transportation) but there are plenty of services along the way and several places to stop for food. Contrast that with riding in the mountains, where there are few services and you are, in fact, lucky to see more than 20 cars on an 8-hour ride.

Finally, here’s the route.  Click on the link for GPS. 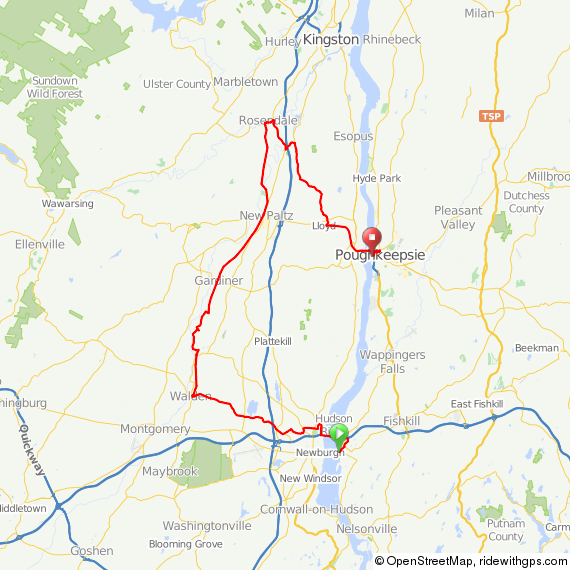 I should have a good report and route for you on Wednesday or Thursday this week…I took Wednesday off to do a 200-kilometer double-crossing of the Hudson with a couple friends (ah, the lifestyles of the self-employed!) Stay tuned for that route and a lot more. If I survive the anticipated freezing rain, that is.

5 thoughts on “Fast and Easy: Beacon to Poughkeepsie via Bike Path”