Do you like climbing? Do you like gravel? Do you have no sense of self-preservation? If you answered yes to all 3 questions, you’ll enjoy this route. Deliberately designed to be the toughest sub-century in the Catskills, it is 85 miles, has about 9000 feet of climbing, and covers at least 30-40 miles of some of the most isolated gravel roads you can find out here. It is, at least thus far, my masterpiece. If you can an excuse to get up to Delaware County, do it now and ride this route. It’s not just worth the trip, it’s worth a pilgrimage.

That said, I’m *really* tired, so this story won’t do justice to the route. In a few days, however, I’ll try to come back and add what will, doubtlessly, be highly amusing anecdotes and antics of grown men on bicycles. Just enjoy the photos for now; in fact, I’d suggest that you click on them to see them full size. My camera, which I’ve been riding with for 3 years now, is dying in a most appealing way–some of the images are quite beautiful.

Also, please keep in mind that I very well may be misplacing the pictures. I don’t keep a diary of where I’m taking shots while I’m riding; in fact, my photos usually involve me trying to ride one- or no-handed over potholes, while randomly clicking because it’s too bright to see the LCD on the back. So take these pictures as a general overview of the route rather than specific views you’ll see at certain points.

I was inspired to create the route by Anton’s magnificent posts on his rides in Delaware County, which can be found here and here. Unfortunately, I never got the chance to go up to his place and ride.

This is the actual route.

We had planned on doing it in the reverse direction from what is shown here, but, because the start and end points were the same, there was no indication on our Garmins whether we should go in a clockwise or counterclockwise direction, and I had failed to look at a map closely before leaving. So, we ended up doing the entire route backwards. In retrospect, this might have been a good decision, because the descent in town at the end of the ride, as we did it, would be absolutely murderous to start out with.

If you have time to inspect the route further on Ride With GPS, you’ll see that all of those climbs have significant 12% to 18% sections. Many of them on dirt. Each of the 9 major climbs on this route could be a highlight for any ride—like the Peekamoose or Slide Mountain climbs. I just decided it would be a good idea to have 9 highlights.

It starts in Margaretville, which I’ll probably misspell in half a dozen ways throughout this post. There is a convenient parking lot right across from the grocery store where you can leave your car all day at no charge (at least we did without issues).

You head out of town on the appropriately named Cemetery Road—a 700-foot climb, but nothing terrible or unmanageable. After a few moments on Route 30, you’ll take a left on West Hubbel Hill Rd. I tried to include every road with the name “Hill” or “Mountain” in them on this route, but I did manage to miss a few. This is the first major climb of the route. It’s about 1100 feet, with significant sections of up to 16%. At least it’s paved! 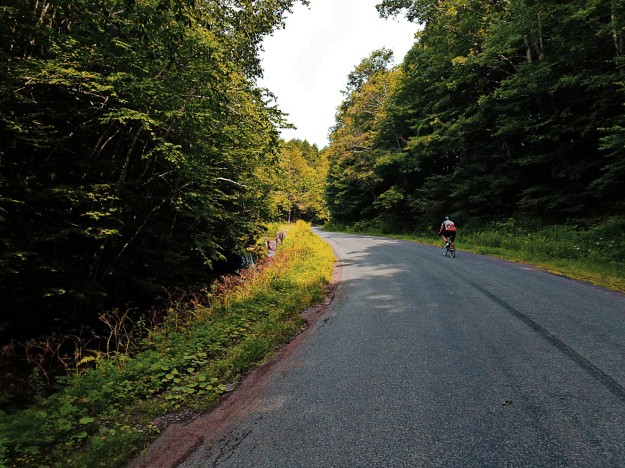 The view from the top of Hubbel Hill Road is great, but there are better views to be had in just a few miles. 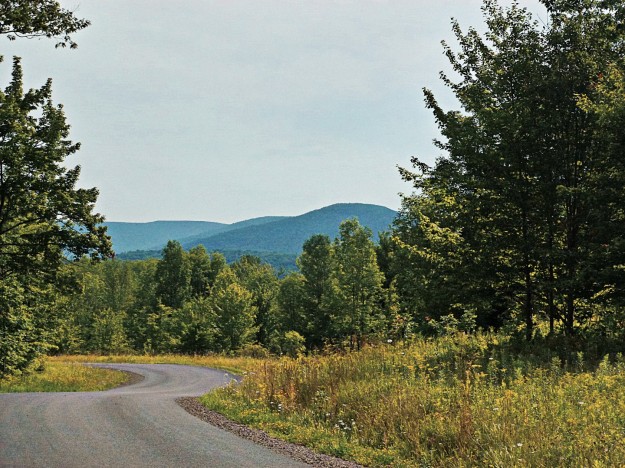 Continuing on, Roxbury Mountain Road offers the first gravel segment of the route. As you’ll see, the gravel here ranges from pale pink to a quite bright red. I did some 30-mph fishtailing on this road, which reminded me to be cautious. 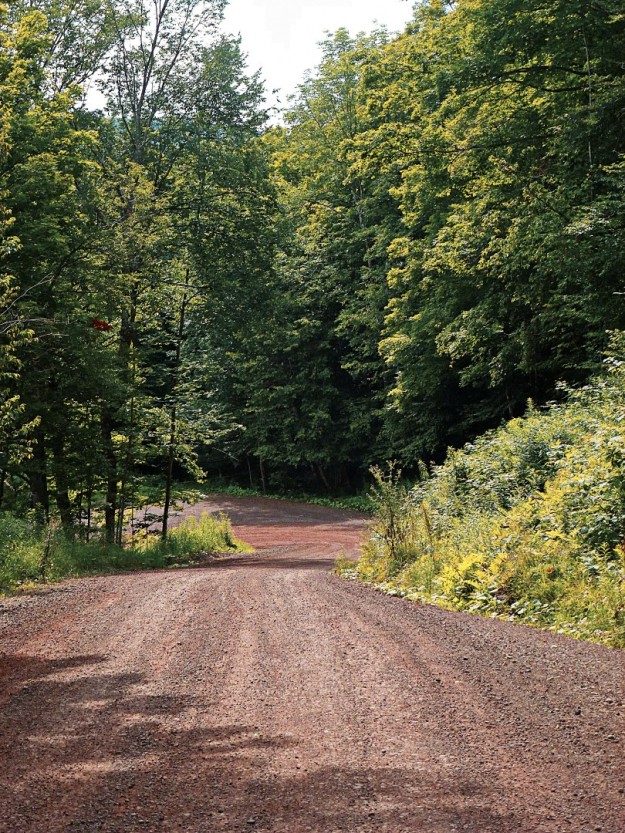 You’ll continue into South Kortright. Unfortunately, South Kortright has no amenties, eg, no place to buy stuff. This turned into a major problem, as the first place we hit to buy liquids and food was just past mile 40–under normal conditions, not a big problem, but keep in mind that by mile 40 we already had 4500 feet of climbing under out belts. So word of warning: bring lots of water or do this route in cooler weather. A few more images of the paved portion of this segment: 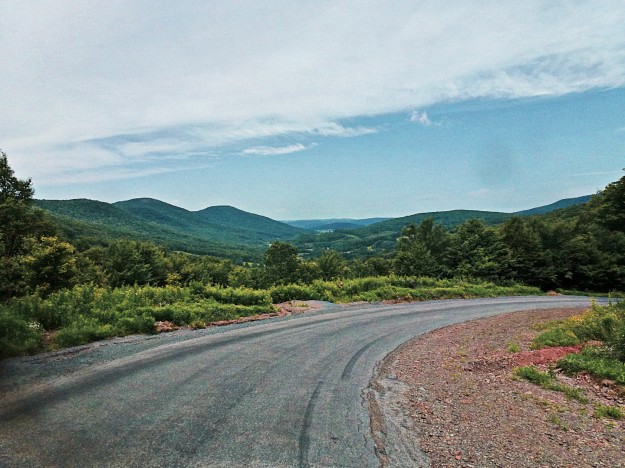 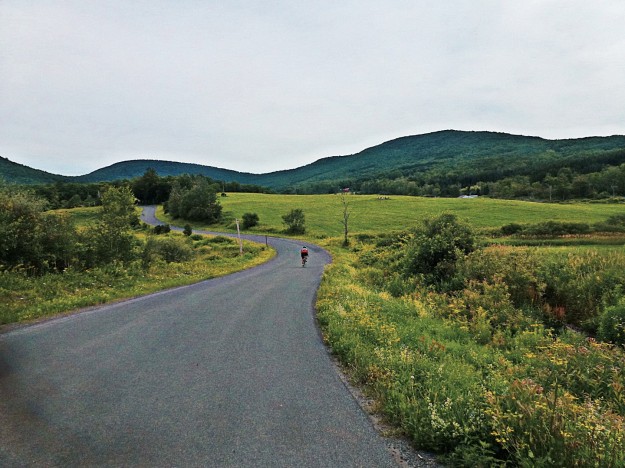 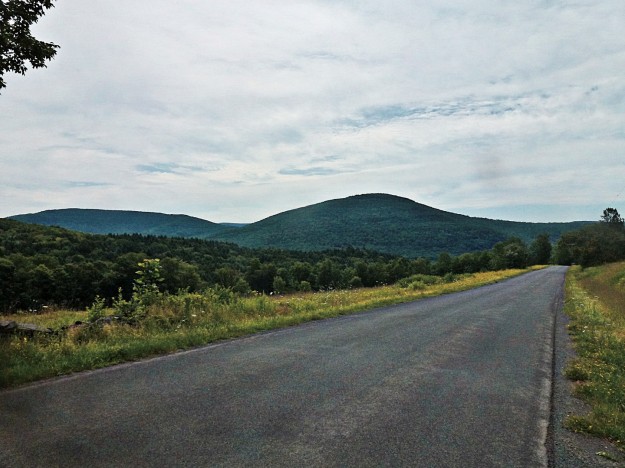 After a moment on a “major” road–Doonan’s Corners Rd, we turned off onto Turnpike Road. More gravel! 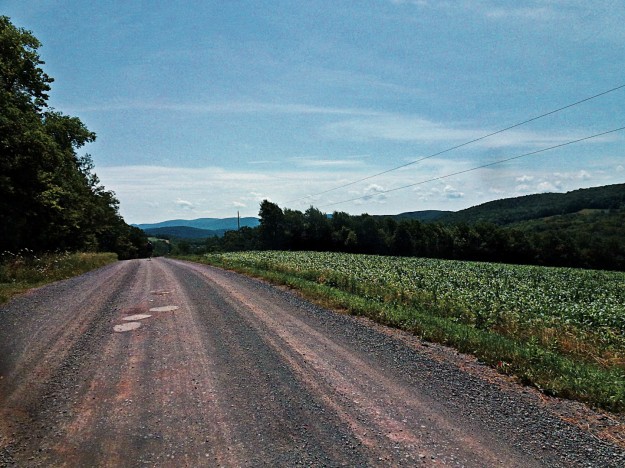 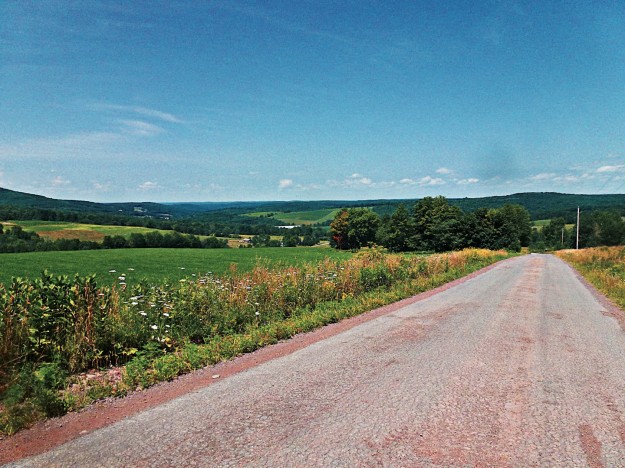 Which ended on a nice big descent. Note that there is significant washboard at the end of this descent. I was riding 650B at 45 psi and I almost lost a filling.

I believe this is Houghtailing Hollow Rd, around mile 39. When a road says it’s seasonal, you know something good (or very, very bad) is coming up. As it turns out, it was beautiful but nothing painful. However, the climb leading up to this road is a brute, I believe 18%+ on gravel. I’m never sure on those types of climbs whether it is better to keep the weight on the rear wheel, risking a wheelie but maintaining traction, or to slide a little more forward. It can be a delicate balance.

And another massive climb. You know you’ve reached the top of something when you see the radio tower (it might be a cellular tower, who knows?). My camera lens is getting messed up enough after 3 years of riding with it that my photos are starting to look pre-instagrammed. I’ve tried cleaning the lens with a lens pen, but it’s not helping. 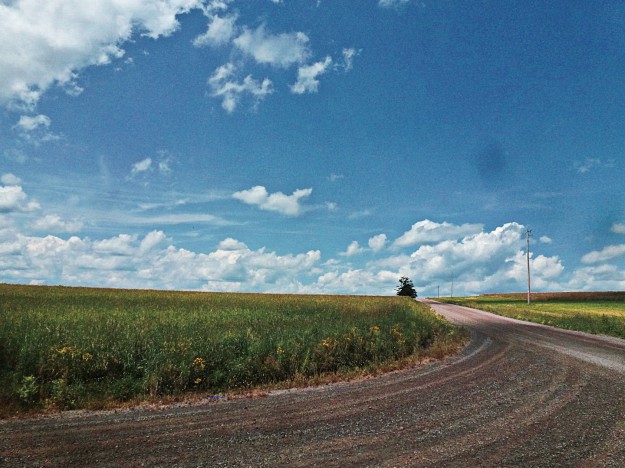 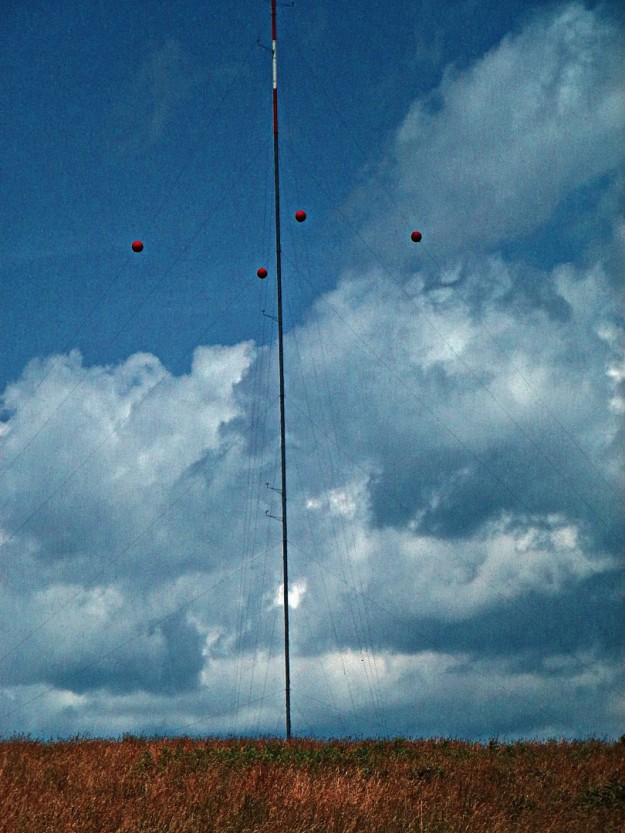 Around mile 48, you’ll ride into the tiny town of Treadwell. It’s a lovely little town, made even more lovely by an *open* general store with that sells Gatoraide and all of the other essentials. Note that they are only open until 3 pm on Sundays; I believe they are open until 6 every other day. Make sure you arrive before closing, otherwise you have a long haul to Delhi to refuel. Delhi has at least a McDonald’s and a Pizza Hut that are open reasonable hours, there may be more appetizing options in the village with less predictable hours.

The toughest part of this ride is the 3 “bumps”, beginning at about mile 65, when you’re already exhausted. The first is terrible, the second–on New Kingston Rd–is truly brutal. The third, Margaretville Mountain Rd, isn’t terrible, but at this point, if you’ve put any effort at all into the ride, you’re probably hurting! Some images from the last 20 miles: 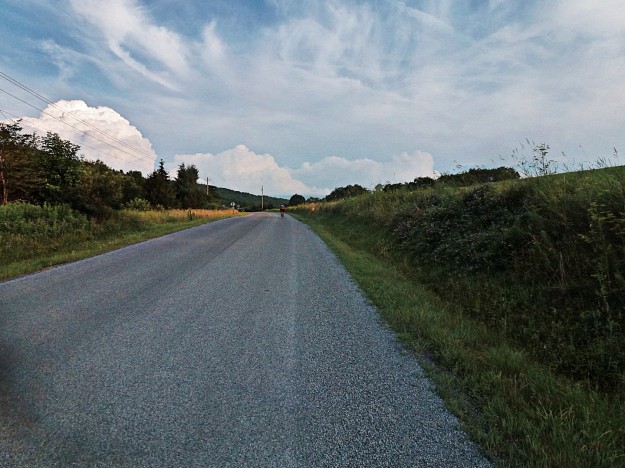 Now…time for bed. This ride really exhausted me…in part, that’s my own fault because–at least for the first 70 miles–I did a lot of sprinting up to the top of hills ahead of my companion so I’d have time to take pictures! This route represents my finest achievement to date on Ride With GPS. If you can make any excuse to get out to Margaretville, try this, you won’t regret it. Unless, of course, you’re opposed to fun.

And a few more photos. Even though the placement of the photos above is vague at best, I really have no idea where I took these. But I like them, so here they are: 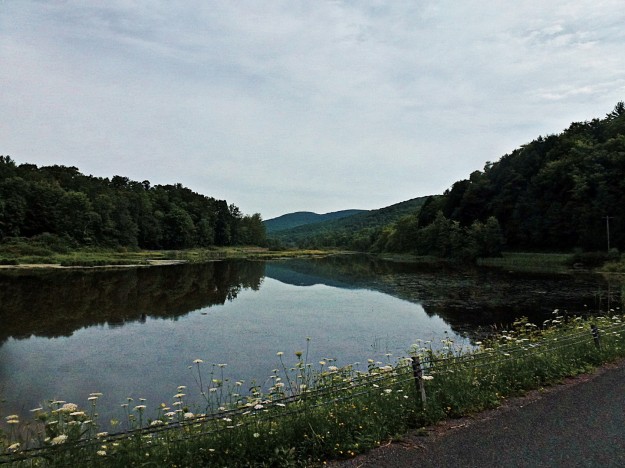 And let’s not forget the covered bridge in Delhi… 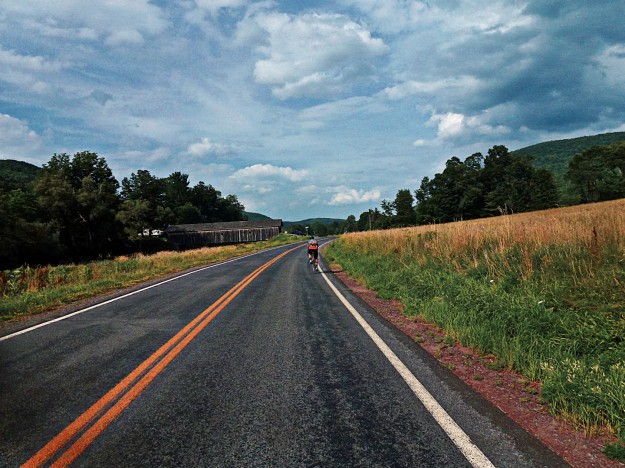