First I’d like to express thanks to John for making me a contributing author on Riding the Catskills. Since I’m only up in the Catskills occasionally between spring and fall, I won’t be contributing regularly… but my aim is to eventually document all the best dirt road mountain passes that Delaware County–my childhood and now seasonal stomping ground in the northwestern Catskills–has to offer, with routes of 35-75 miles with heavy doses of bucolic dirt roads, steep climbs, fast descents and an obsessional avoidance of highways and traffic, designed to bring wide smiles to anyone who rides them. I may also occasionally post planned, partially vetted routes of up to 100 miles, stitching together segments I’ve already ridden with new ones, that may be too long for me to tackle in the near term but may be appealing to more ardent long distance cyclists. Below is a post about my Columbus Day Catskills ride in which I continued to find some absolutely stunning dirt roads.

Columbus Day weekend is a big tourist weekend in the Catskills, with travelers descending from afar to enjoy the fall foliage. Being a holiday weekend, I, too, often make the trip out here from Boston. Typically, the colors in the Northwestern Catskills are at peak vibrancy this weekend–several weeks ahead of eastern Massachusetts–and holiday or not, it’s a great excuse to come out this way just to be a leaf peeper. To the disappointment of many who made the trip here for the rich colorful palette that marks this weekend (I met one couple here from Colorado; Aspens get boring after awhile, they told me), the week prior saw an intense windstorm that stripped many of the leaves that weren’t quite ready to let go. Alas. But not all the leaves had fallen, there was still some fall color left.

I was here for an extended weekend with my family, but I just had to get a ride in, however short it had to be to maintain family commitments. The loop I settled on was 36 miles, relatively short compared to John’s routes. But with 3800 feet of elevation gain (3000 ft in the first 20 miles alone), there were enough climbs and descents to keep it interesting, another exercise in pass hunting.

The route started and ended in Delhi (pronounced “Dell-Hi”), the county seat and nice little historic town, about nine miles from my home in Bloomville.

From Delhi, the counterclockwise route immediately took me over a steep hill, Belle Hill. Normally I don’t like to start off with a hard climb, not having the chance to warm up first.  Doing the loop in reverse would have avoided it, but I really wanted to do the loop this way, because it includes a five mile descent I had been eagerly waiting to do. As with so many hills around here, the peaks are punctuated, so by the time your rear wheel reaches the top, your front wheel is practically heading down the other side. As I reached the top of Belle Hill, not quite warmed up, the pavement turned to dirt, and I enjoyed the first of many lovely descents.

At the bottom, I followed the valley out of Delhi to Meredith along Peaks Brook Rd, a quiet paved road with a slight but steady uphill grade. After a couple of miles, it turns to dirt, and after a few more miles of gentle climbing, another three miles of descending on dirt.

At this point, I mistakenly turned onto Warren Rd, thinking it was a continuation of Peaks Brook Rd. This led me north toward Treadwell, a cute hamlet that John passed through on his Delaware 85 route he posted about this past summer (his masterpiece!).

Oddly, despite growing up here, I hadn’t ever passed through Treadwell. I was glad I had made the wrong turn, giving me the excuse to finally see it– it boasts an adorable general store that has been continuously run since 1841. I highly recommend working Treadwell into any local routes– there aren’t many places in the area with food and facilities, and here you can get sandwiches, fresh baked goods and roofing nails. The atmosphere is infinitely more charming and welcoming than any gas station/convenience store you might find, and it’s a fun step back in time. I returned to Treadwell with my family the next day, my kids bought penny candy!

From Treadwell, I headed back south on County Highway 16 towards Hamden– as John did. But shortly outside Treadwell, I detoured off onto Douglas Hall Rd, which wound around some farms as it climbed steadily.

A surprise awaited me when I reached the four-way junction on top. I had originally planned to turn onto Snake Hill Rd (which I would have been on had I not detoured into Treadwell), but when I saw the single-lane dirt road straight ahead, with the sign: Seasonal Limited Use Highway. No maintenance Dec 1 – April 1, I had to change course once again… whenever you see that sign in this area, it’s a promise of a worthwhile investigation.

Unlike most back roads in the area that seem to go up or down, Ridge Rd, as its name implies, follows the top of a ridge for five miles. It’s mostly tree lined, passing through woods, every so often affording a spectacular vista from atop the ridge. Let me be blunt: this road qualifies as a must ride; just let the photos speak for themselves: 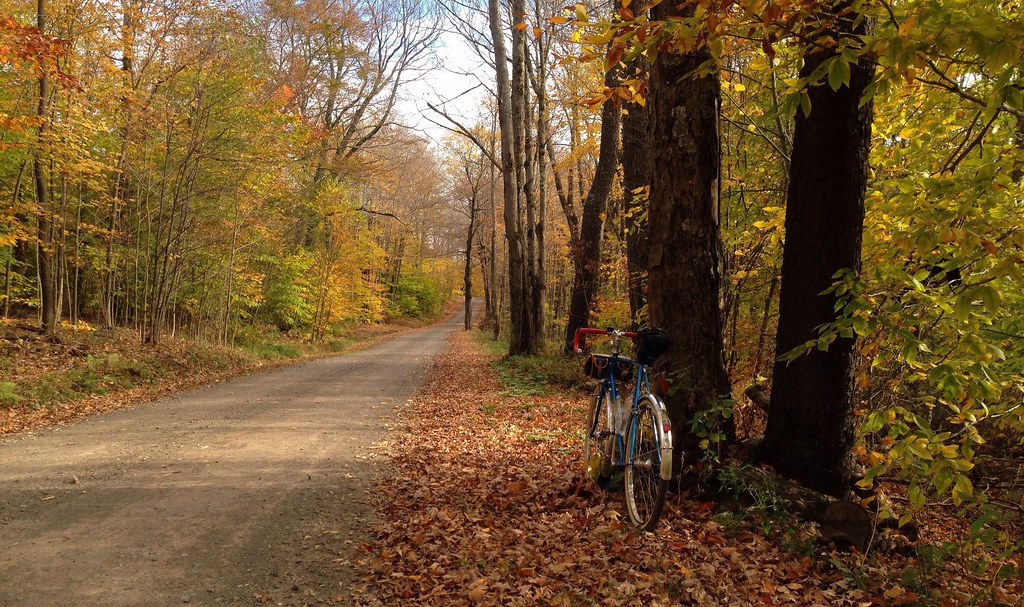 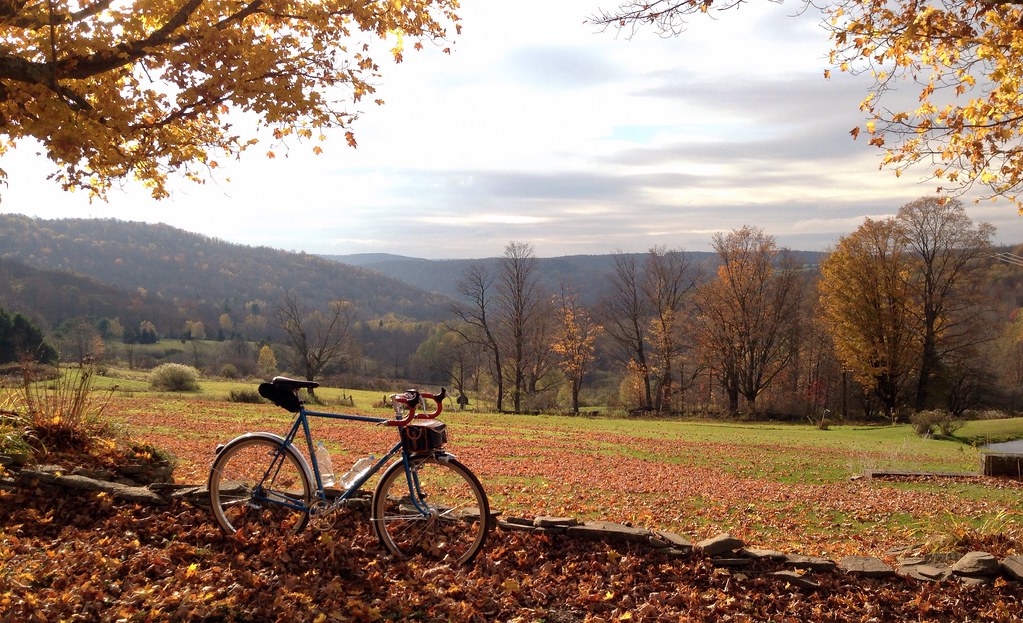 At one point I had to stop and consult a map; the road split, and signs were conspicuously absent. I felt a sense of déjà vu: the fork felt eerily similar to the one in the final scene in the Jim Jarmusch film Down by Law. Who knew the Catskills could look so much like rural Louisiana? See for yourself:

Ridge road ended, and pavement resumed. From here, Launt Hollow Rd whisked me down a continuous five mile descent (the one I had been eyeing) to State Rt 10 in the village of Hamden. (The next route I have planned in this area includes a continuous 10 mile descent from Hamden to the Pepacton reservoir).

Rt 10 is a busy highway, but at least in the village the speed limit is tamed down. And just after the turn onto Rt 10 is one of my favorite eateries– Lucky Dog Farm Store. Another charming cafe and locavore farm store, they serve up artisanal sandwiches and lunches. Worth a stop, but their hours are more limited than Barlow’s in Treadwell (Lucky Dog was closed when I was there).

I designed the route to take in the Launt Hollow descent and Lucky Dog while avoiding Rt 10 at all costs. I stayed on Rt 10 for only a half a mile before I turned right to cross the Delaware River, West Branch, over a covered wooden bridge. This took me to Back River road, a gently rolling, quiet paved road that follows Rt 10 but on the opposite side of the river. It heads all the way back to Delhi, which John also passed through on his Delaware 85 route, although John followed Rt 10 from Hamden to Delhi.

There are plenty of facilities in Delhi. I won’t mention the several repugnant fast food chains. Sure, they’re welcome in an emergency, but on most days there are better options, and my pick would be Good Cheap Food, another locavore market. Plus there are several indie cafes and bookshops along Main St, so designing a route to include Delhi is a smart bet.

Given that this route and John’s route intersect at Treadwell and again at Delhi, it’s possible to merge the best portions of each and come up with an another dirt road stunner of just about any desired length.

5 thoughts on “A Columbus Day Ramble in Autumnal Delaware County”